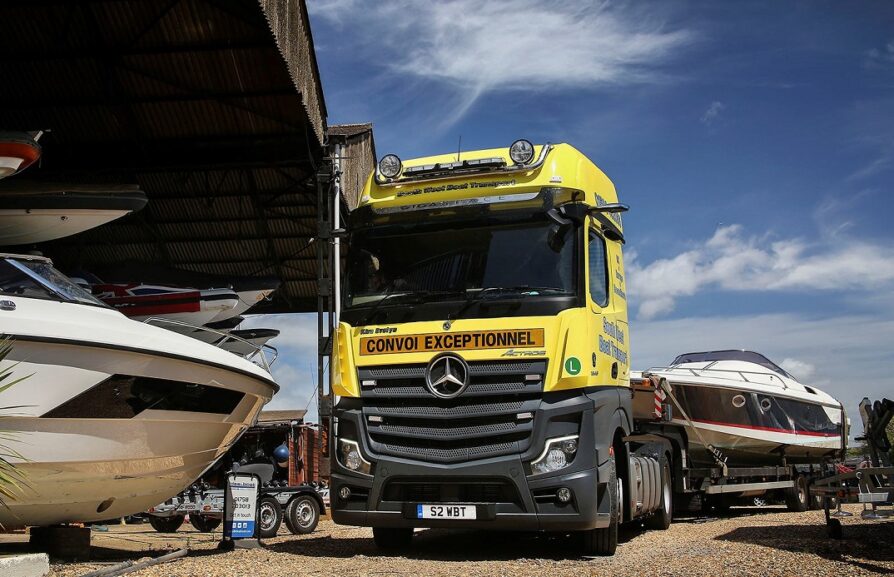 After struggling with poor reliability from their existing truck manufacturer for many years, Michael Whelan decided to try a Mercedes Actros in 2013.  Owner of specialist boat transport company, South West Boat Transport,  Whelan found the reliability so much better he bought another in 2017.  Nearly three years on sees the company invest in a new flagship Actros 1848 Gigaspace.

With regular runs across Europe, reliability is key. Nobody want to break down in a foreign country, especially with a load that the customer is expecting.

With bases in Lymington, on The Solent, and Plymouth, South West Boat Transport serves boat builders, marinas and yacht brokers, as well as private individuals. Its 4×2 tractor units move motor cruisers and sailing yachts on air-suspended boat trailers with adjustable supports, throughout the UK, Continental Europe and Scandinavia.

Mr Whelan established his business in 2005, and for the next eight years ran trucks by another manufacturer. “It turned into a bit of a nightmare, though,” he recalled, “as we suffered a series of breakdowns.

I acquired my first Actros in 2013 and was so pleased with its performance that I added a second two-and-a-half years ago. Our trucks typically cover 100,000 km each year, but I’ve not had one breakdown since I switched to Mercedes-Benz.

“As well as being bulletproof when it comes to reliability, the Actros is competitively priced, good on fuel, and extremely comfortable. Week in, week out, these vehicles do the job I need them to do, so there’s absolutely no reason for me to change.”

Mr Whelan is particularly pleased with his new truck’s fuel efficiency. Over its first few weeks on the road, during which assignments included a five-day, 3,000-mile round trip to Málaga, in southern Spain, to collect and bring back to the UK a 37ft powerboat, the Actros averaged 12.6 mpg. This puts its more than a mile per gallon ahead of its predecessor. The company’s other Actros averages 10.9 mpg, although this unit tends to be used to transport bigger, heavier boats.

Mr Whelan drives the new unit, which arrived via the Southampton branch of Dealer Marshall Truck & Van. The range-topping GigaSpace cab sports a roof-mounted Kelsa beacon bar with additional spotlights, while the contemporary StyleLine interior features aluminium-look and chrome trim, and is equipped with a pull-out fridge and a microwave oven.

A ‘special order’ chassis, the Actros is also fitted with long-range tanks that carry up to 820 litres of fuel and 90 litres of AdBlue. Its second-generation 12.8-litre in-line six-cylinder engine produces 350 kW (476 hp) and drives through a 12-speed Mercedes PowerShift 3 automated manual gearbox.

“The fuel savings are very welcome indeed,” said Michael Whelan. “I really like the new Multimedia Cockpit too. I very quickly got the hang of it, and now find the twin screens clear and intuitive to operate, a definite leap forward compared to a traditional dashboard.

“Thanks to MirrorCam, the visibility is also much better, while the cab is just a really nice place to be, even at night – the bed’s excellent, so I always get a great night’s sleep. For my money, Mercedes-Benz has taken the best truck on the market, and made it a whole lot better.”

The subject of a Mercedes-Benz Finance operating lease, South West Boat Transport’s new Actros is being inspected and maintained, like its stablemate, at the new facility opened by Marshall Truck & Van on Southampton’s Nursling Industrial Estate late last year.