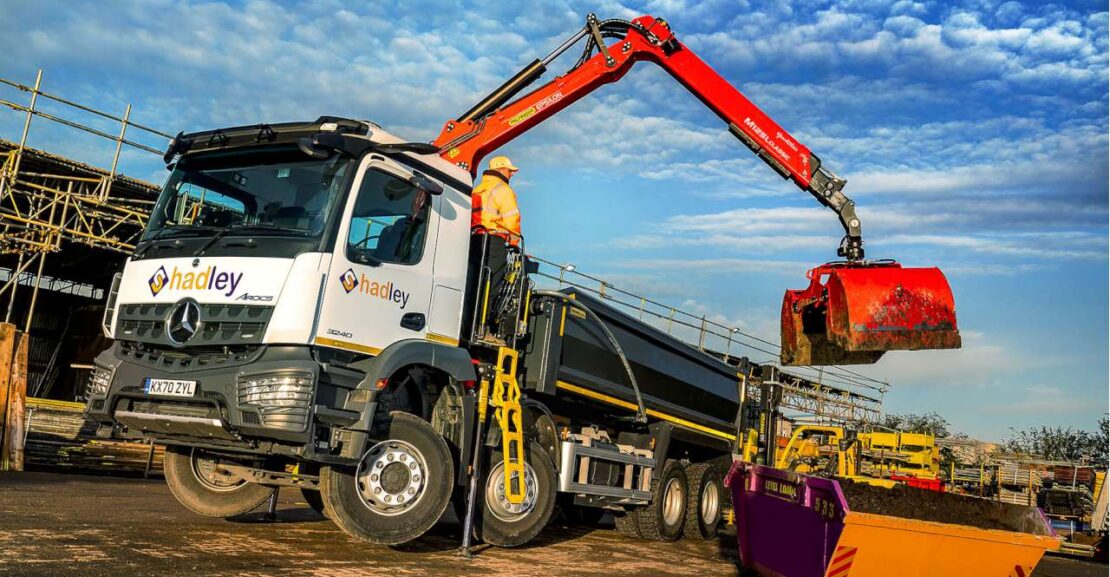 No six-month wait for the chassis to be made to order, followed by a three-month multi-stage build for the body and crane. Scaffolding specialist Hadley Group ordered their new Arocs using the Mercedes ‘WorkReady’ programme and it arrived inside a fortnight – ready-bodied.

To operate in the company’s new waste management the new Arocs is its first tipper-grab, a 32-tonne 3240 which is now lined up alongside an 8×4 Arocs hook-loader which was supplied six weeks earlier, also in double-quick time, by the same Dealer, Intercounty Truck & Van.

Although the Kent-based operator runs a number of other Mercedes-Benz trucks, the latest two are its first new-generation models which have the camera-based MirrorCam system, which replaces conventional mirrors.

Both are 3240K variants with 10.7-litre six-cylinder engines that produce 394 hp and drive through 12-speed Mercedes PowerShift 3 automated manual transmissions. They have ClassicSpace M Cabs – the tipper-grab has a 320mm engine tunnel, the hook-loader a 170mm tunnel – and are fitted with FORS (Fleet Operator Recognition Scheme)-compliant camera systems.

Established in 1997, Hadley Group operates from headquarters in Rochester, where both of the new eight-wheelers are based, and has depots in Avonmouth, Hastings and Salford. It offers a comprehensive service covering all aspects of the scaffolding industry.

As Hadley Scaffolding it has always played a particularly prominent role within the rail and road infrastructure sectors – the company is a supplier to many of the rail industry’s biggest names, including Network Rail, for which it works on bridge, station refurbishment and other projects across the UK.

Its recent rebranding as Hadley Group follows the decision to diversify into the commercial waste management sector. Managing Director Carl Byford explained: “It’s just a sideline at this stage, and we’ve only assigned the single tipper-grab to the new venture so far. But we’re aiming to target a lot of the big builders to which we already supply scaffolding services, and are confident it represents a genuine opportunity to grow the business.”

Hadley Group’s mixed-marque fleet of 13 trucks includes four other vehicles with three-pointed stars. “Mercedes-Benz builds a premium quality product and ours have always lived up to the brand’s reputation for durability, reliability and competitive running costs,” confirmed Mr Byford.

Pre-built with Hiab Multilift equipment and supplied from its own stock by Intercounty Truck & Van, the Arocs hook-loader works with platforms that carry scaffolding boards, poles, fittings, and other equipment. “We’ve used this system for some time and it works really well in terms of ease and efficiency,” said Mr Byford. “Rather than having a truck parked up for ages while it’s loaded or unloaded, we can send the ‘ro-ro’ (roll-on, roll-off) out to a number of projects in the same day, because it only remains at each location long enough to swap the bed.”

The second Arocs has a steel Thompson tipping body and an Epsilon M125 crane purpose-designed for operation with a clamshell bucket. This vehicle was built for Mercedes-Benz Trucks’ WorkReady programme, which provides operators with access to a range of rigids and tractor units that are readily available off-the-shelf and at very short notice.

Key to Hadley Group’s success in retaining high-profile customers within the heavily regulated rail and road sectors has been its ongoing commitment to health and safety. Carl Byford said its adoption of vehicles with MirrorCam technology represented another important step forward.

MirrorCam’s compact cameras relay images to twin screens mounted inside the cab, on the A-pillars. Not only do they provide much improved visibility to the rear, but by replacing the conventional mirrors responsible for major blind spots they also ensure that drivers can see a lot more of what matters in front of them. The result is enhanced safety – particularly for vulnerable road users such as cyclists and pedestrians – and less stress for the individual at the wheel.

“We’ve put two experienced drivers on these new trucks and they’ve adapted to MirrorCam very quickly,” said Mr Byford. “Both have told me they prefer the cameras to mirrors, because they can see so much more.”

“It was evident from the outset that Amit is very passionate about his job,” added Mr Byford. “Having identified the need for a new hook-loader we wanted it quickly and he certainly performed, delivering the vehicle less than two weeks later.

“On the basis of that experience we had no hesitation in going back to Amit six weeks later, for the tipper-grab. Again, we were working to a tight schedule and again he was very helpful, quickly coming up with the right truck, at the right price. I couldn’t fault the service.”

View all Hookloader Trucks for sale...>

View all Arocs Trucks for sale...>