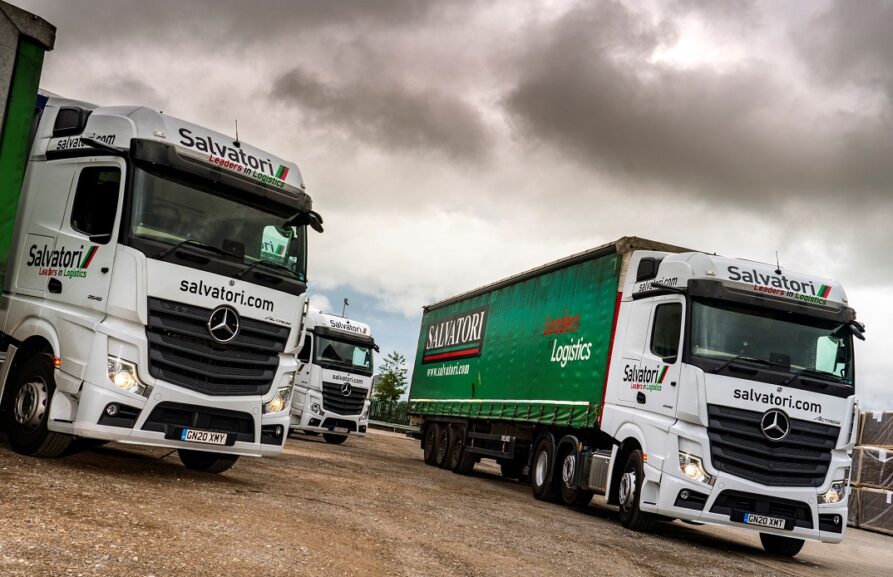 Sometimes you need a bit of luck.  That’s what happened for Truck Sales Executive Martin Kemsley at Mercedes-Benz dealer, Sparshatts.  The Salvatori Group opened an additional depot in Sittingbourne, Kent on the town’s Eurolink Industrial Estate alongside the Mercedes truck dealer.

That’s a solid introduction, but you still have to close the deal – Salvatori was running some 90 trucks from their head office – none of which were Mercedes-Benz.

The Salvatori Group’s own head office and main depot, which has storage facilities for up to 11,000 pallets, is in Aylesham, Canterbury. The company runs a fleet of approximately 90 trucks, the majority of them tractor units, in which two other brands hold sway.

So Martin Kemsley hosted Daniel Salvatori and a colleague when they made a personal visit to Sparshatt before committing to the Actros. “It’s a big and impressive set-up,” Mr Salvatori recalled. “We were given a tour of the premises and met members of the Dealer’s aftersales management team, as well as some of the guys on the shop floor.

“I was entirely satisfied with all that we saw and heard, as we were given all the promises we’d been seeking. Ultimately, time will tell, but Sparshatt certainly has a great opportunity to impress us – as I told its workshop manager, it’s what he and his team do over the next few years that will sell us the next Mercedes-Benz trucks.”

The subject of a Mercedes-Benz Finance contract hire agreement, the latest additions to its fleet are double-shifted and are being inspected and maintained by the Service team at the Dealer’s headquarters.

The operator ordered its new Actros after trialling one of Sparshatt’s demonstration units for a week last year. With a 530 hp output, that vehicle was more powerful than the new trucks it is now running, which employ 476 hp versions of the same 12.8-litre in-line six-cylinder engine. It also had a GigaSpace cab, the biggest of the four available.

Managing Director Daniel Salvatori confirmed: “The demonstrator did well on fuel, while the drivers liked it too. Ultimately, for us, a truck is a tool with which to do a job. I need it to be reliable, I need it to be fuel-efficient and environmentally-friendly, and above all I need it to be safe and comfortable for our drivers. I’m very optimistic, on the evidence of what we’ve seen so far, that the Actros will tick all of these boxes.”

“Our drivers were all very quickly converted to the cameras,” confirmed Mr Salvatori. “As with so much else on this truck, MirrorCam is a very radical concept, one that’s both interesting and exciting.”

Salvatori maintains the trucks it operates from Aylesham in its own workshop. The aftersales support pledged by Sparshatt was a crucial factor in the company’s decision to run only Mercedes-Benz trucks from its Sittingbourne depot.

The Salvatori family have been in business in the Canterbury area for more than 80 years. Their company, which is also the UK’s longest-established processing fruit trader, prides itself on its philosophy of always putting the customer first, and on its “old-fashioned” values of meticulous attention to detail, and working with honesty and integrity.

It provides international full load and groupage services, and regularly sends trucks to all parts of Europe. The Actros, however, are on domestic work. They undertake local and regional collections and deliveries during the day, then trunk each night to the Palletways hub in Lichfield, Staffordshire, and Greenford, West London – Salvatori is a current holder of the prestigious Palletways Platinum Award.