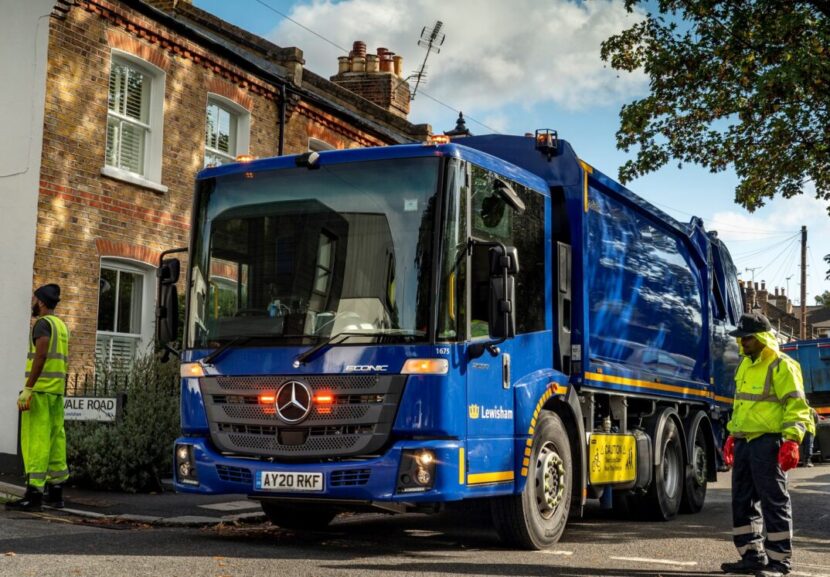 The most impressive piece of news is that local councils are actually investing in infrastructure for providing services to the residents of the borough.

Many councils will outsource the work or underinvest in a fleet renewal programme, but the ULEZ is forcing the hands of some boroughs.

Lewisham has acquired no fewer than 39 Econics over the last few years.

The council’s latest order of 24 Econics went to Mercedes-Benz Dealer Orwell Truck & Van to complete their waste collection and recycling vehicle replacement programme, adding to the 15 Econics acquired a couple of years ago.

All are 6×2 Econic 2630L models with 7.7-litre in-line six-cylinder engines that transmit their 299 hp outputs to the road via six-speed Allison automatic gearboxes.

Painted by the Mercedes-Benz factory in Lewisham Council’s ultramarine blue shade, the trucks are fitted with Geesinknorba’s single-compartment GPM IV compactor bodies, which offer 20m3 capacities and are paired with its combi split bin lifts.

Rear-steer axles enhance manoeuvrability – the reduced turning circle makes the job easier for drivers negotiating tight streets in this bustling part of the capital. So, too, do the panoramic windscreen and low seating position that aid visibility.

The trucks supplied to Lewisham Council by Orwell Truck & Van are fitted with Mercedes-Benz Trucks’ Blind Spot Camera System, which comprises a seven-inch monitor, two cameras on the exterior mirrors, and others facing front and rear.

The latest are also equipped with Active Brake Assist 4 emergency braking technology, which is programmed to recognise other vehicles at higher speeds, as well as pedestrians when moving more slowly, and is capable of bringing the truck to a complete stop.

In addition to the refuse vehicles Orwell Truck & Van will be supplying the authority shortly with a Thompsons-bodied tipper grab based on the same 26-tonne Econic chassis. This will be assigned to clean-up duties after incidents of fly tipping.

Although it had not sourced vehicles from Orwell Truck & Van prior to 2018, Lewisham Council has been running Mercedes-Benz Econics since 2013, and has been a Geesinknorba customer for more than 25 years.

The 39 refuse vehicles purchased over the last couple of years for mainstream collections of domestic and trade waste have all replaced older Econic-Geesinknorba combinations. They are now working alongside a pair of 18-tonne Econics with plug-in electric bodies, also by Geesinknorba, which are used to compact and remove refuse that would otherwise accumulate around traders’ stalls at Lewisham Market and Deptford Market.

Noel Everest, Lewisham Council’s Service Group Manager for Passenger & Fleet Services, commented: “We’d fallen behind at one stage with our replacement programme, and took on some short-term rentals to tide us over. In the last couple of years, though, we’ve upgraded the entire fleet, and I’m delighted that we’ve been able to do so with more Econics.

“As well as being superbly reliable and offering whole-life operating costs that blow its main competitor out of the water, the low-entry Mercedes-Benz is very popular with our crews, who appreciate its comfortable, air-conditioned cab, and ease of access. It’s just a great all-round product.”

As with its previous set of acquisitions, Lewisham Council conducted a rigorous tender process before placing its latest order with Orwell Truck & Van – as the prime contractor, the Dealer liaised extensively with the bodybuilder and kept its customer up to date on progress.

“Orwell’s Fleet Sales Manager Rob Dale certainly knows his stuff and is very easy to work with,” continued Noel Everest. “Whenever we’ve had a query or something’s cropped up he’s been quick to respond, so I’m very happy with the service.”

Lewisham Council maintains the fleet in its own workshop but receives warranty support and parts deliveries from the local Mercedes-Benz Dealer. “Only rarely have we had any issues over the years, but the back-up has always been there when we’ve needed it,” he added.

View all Econic Trucks for sale...>