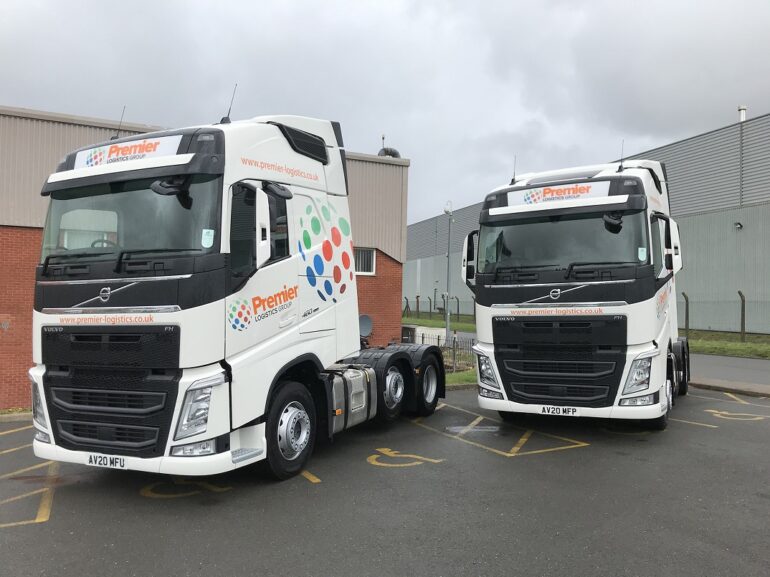 Getting 11mpg from a brand new tractor unit out of the box is impressive by any standard. With a general haulage brief, replacing trucks that were achieving 9.5mpg, the two Volvo FH460 trucks fitted with I-Save, Volvo may be a more common brand in Premier Logistics’ mixed fleet of 50 trucks.

The Bardon-based haulier has added the two 460hp FHs with I-Save, alongside one new 500hp FH, to its 50-strong mixed fleet. Supplied by Jason Brewin, Truck Sales Executive at Volvo Truck and Bus Centre East Anglia, all three trucks feature Globetrotter cabs with the single bed living package, I-Shift gearboxes and are built on a 3,900mm wheelbase.

The FH with I-Save is the most fuel-efficient 44-tonne tractor unit in Volvo’s truck range. It combines the D13TC Euro-6 Step D engine with turbo-compounding and updated fuel-efficiency features. The engine produces up to 300 Nm of extra torque, which means less acceleration and fuel is required in steady motorway traffic.

Additional software such as Volvo Truck’s predictive cruise control, I-See – that analyses and adapts to gradients in the road ahead and includes gear-shifting software optimised for long-distance applications – add to I-Save’s fuel saving potential.

Like any transport operator, we are always looking for ways to reduce our fuel bills and these new Volvos should certainly help us.

“They haven’t been in service long, so for the two 460 turbo compounds to already be averaging 11mpg is pretty impressive.

“We always consider different manufacturers when we are adding to the fleet, but we selected Volvo for their strong residual values and, most importantly, the fuel savings they could give us.”

Premier Logistics has one of the FHs with I-Save working on a contract moving aluminium extrusions all around the UK. The other is working in the firm’s general distribution fleet transporting food and confectionary. Both are averaging roughly 450 kilometres per day.

The 500hp FH is working double shifts, doing shorter runs transporting heavy loads in the day and pulling a double-deck trailer on a return run to Ashton-under-Lyne at night.

“All three trucks are performing well,” says Christopher. “The drivers love them. We go through the fuel sheets when we get them from Volvo each week with the individual drivers just to create that bit of extra competition within the team!”

Working six days a week, the trucks will be in service for five years and are expected to do roughly 140,000 kilometres per year.

“They are a step up on the vehicles they’ve replaced,” adds Christopher. “As a business we want the best kit for our drivers and to set the right image of the company when we’re out on the road.”

Established in 2004, Premier Logistics specialises in palletised distribution, warehousing and transport for the food and construction industries.