Home > Is it a Rigid or a Tractor Unit? – New Multi-Purpose Mercedes Actros

Is it a Rigid or a Tractor Unit? – New Multi-Purpose Mercedes Actros 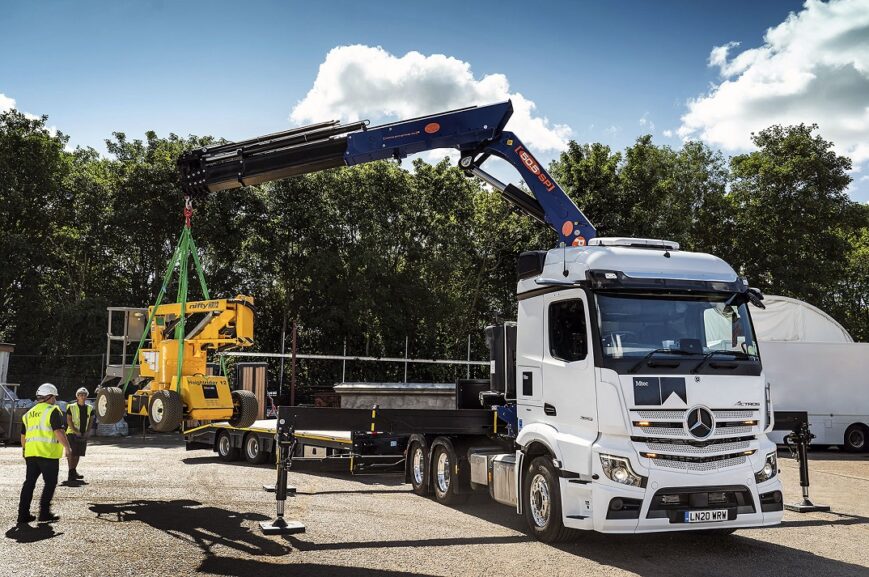 You wouldn’t think there’d be much call for an 80-tonne GTW tractor unit with a crane fitted that can turn itself into a dropside truck.

Well, International fine art logistics specialist Mtec has not only found a use for one, they have had one built. Their new Mercedes Actros heavy haulage tractor unit is used to deliver monumental sculptures for artists, galleries and museums, as well as private collectors.

Here’s the deal.  If they have huge pieces of art to move, then it has to be the low loader and use the Actros as a standard, heavy haulage tractor unit.  For a series of smaller pieces – especially if delivering to a museum or gallery that has restricted access – then bring the kit on the drawbar trailer and one by one tranship it to the small dropside to take the ‘tractor unit dropside’ to the point of delivery.

Built by Central Hydraulic Loaders, of Tamworth, the dropside body sits over the fifth wheel. The same company also installed the crane and the VBG drawbar coupling employed when the truck pulls its tri-axle Chieftain beavertail trailer.

As Mtec Managing Director David Williams explained, “Manoeuvring a tractor and trailer can be a challenge at places like Kew Gardens, and some of the stately homes we visit,” he said.

“It’s obviously not an option for the heaviest sculptures, which can often weigh in excess of 50 tonnes. But for smaller pieces the demountable body and drawbar configuration allows us to crane the item off the trailer and then take it in on the truck itself. It’s a highly practical solution that’s already working very well.”

Mtec was established by Mr Williams in 1993. In addition to its headquarters in Ware, and other depots in Cambridge, and Larkfield, Kent, the company has a secure storage facility in Venice, and another in Antwerp, which it opened shortly after the Brexit vote in 2016. Trucks are regularly sent as far afield as Russia, Ukraine and Turkey.

Mtec’s fleet of 20 trucks is dominated by Mercedes-Benz. Most are tractors, and the new Actros is its fourth heavy haulage unit. The remaining fully air-suspended rigids have gross weights of between 15 and 26 tonnes, among them a box-bodied Atego 15-tonner supplied by S & B Commercials last year.

We’ve always chosen Mercedes-Benz trucks for their cutting-edge design and features, as well as their outstanding reliability and the manufacturer’s unrivalled back-up on the Continent

“I drove one of S & B’s Actros demonstrators before ordering our new truck, and was hugely impressed with MirrorCam, particularly the way the camera pans to keep the rear of the trailer in view at all times, including on roundabouts and tight bends.”

As with previous acquisitions, Mtec has signed-up to an eight-year Mercedes-Benz Complete Service Contract, under which its new Actros is now being inspected and maintained at S & B Commercials’ workshop in Hatfield.

“I’m super happy with the aftercare support we receive from S & B,” confirmed Mr Williams. “They know our fleet well and will do whatever it takes to keep us on the road. The Dealer’s Truck Sales Manager Sam Setterfield also provides a first-class service. I really cannot fault S & B.”