It’s All Gas at Volvo Trucks 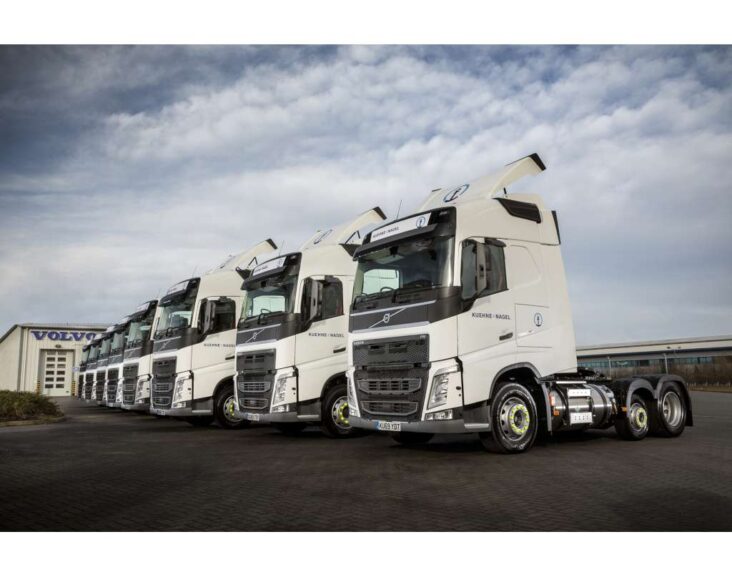 There’s plenty of talk of battery electric trucks, hybrid trucks and fuel cell trucks of the future.  However, these still aren’t realistic for 44 tonne trunking operations.   A UK-based operator has found a way to cut CO2 by as much as 80% using technology that is already available AND can be used on trunking operations with no range and little payload penalties.

No stranger to using alternative fuels, Kuehne+Nagel has already run some dual fuel trucks, and for this reason the company participated in the Innovate UK-funded ‘Dedicated to Gas’ project. This evaluated the viability of Euro 6 gas heavy goods vehicles as an alternative to diesel and demonstrated their potential to unlock significant CO2 savings and reduce running costs.

As a result of the project, Kuehne+Nagel have ordered their first vehicles from Volvo Trucks. The company has put eight new Volvo FH Globetrotter LNG (Liquified Natural Gas) tractor units into 24/7 operation on two major contracts with Whitbread and Costa.

The new trucks will pull temperature-controlled double-deck trailers on national trunking routes from the customer’s Wellingborough regional distribution centre (RDC) to sites in Avonmouth, London and Manchester. Each vehicle is expected to cover 125,000 miles per year, with refuelling taking place using an on-site facility operated by Air Liquide.

Andrew Blake, National Distribution Manager at Kuehne+Nagel, says: “We’d previously run dual fuel trucks for seven years, but it was our involvement in the Dedicated to Gas trials which confirmed that LNG was the right approach to take. We’re projecting an initial 20 per cent reduction in CO2 emissions on these routes using standard LNG, with the intention of moving quickly to bio-LNG to increase this reduction to at least 80 per cent in the near future.”

Unlike Iveco who use spark ignition for their gas trucks, Volvo’s approach to natural gas uses compression-ignition technology (like a normal diesel engine) which relies upon small amounts of diesel to initiate ignition of the air-fuel mixture.

The downside is having to carry some diesel on board, but it enables the Volvo G13C engine to deliver the same 460hp and 2,300 Nm of torque as its diesel-only counterpart, with matching service intervals and reliability.

Blake added, “From an engineering perspective we have absolute confidence in Volvo’s natural gas powertrain to deliver the performance we need in an intensive around-the-clock, 44-tonne application. We looked at the spark ignition options available in other vehicles, but we didn’t want any trade off in terms of performance or fuel efficiency.”

The arrival of the Volvo marque into our fleet has been really well received. When we told our drivers we’d opted for the premium FH Globetrotter cab, there were some huge smiles amongst the team!

The new vehicles have been supplied on a five-year Volvo Financial Services contract hire deal which incorporates a Volvo Gold Contract repair and maintenance package, supported by a 100 per cent uptime promise. All scheduled servicing and maintenance will be carried out at Volvo Truck and Bus Centre East Anglia’s Wellingborough dealership, located less than five miles from the customer’s RDC.

View all FH Trucks for sale...>