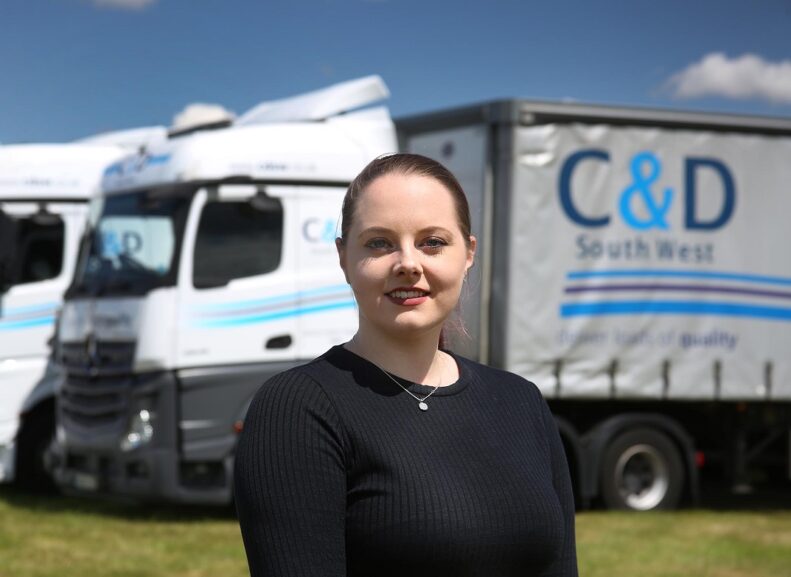 You would never expect to hear that the type of mirror a truck has fitted could sway a brand loyal truck operator from switching truck brands.

That’s what appears to have happened with C&D South West when buying Mercedes-Benz for the first time.

Two are from the new-generation range launched last year, and equipped with MirrorCam systems. However, in the face of concerns from some drivers about this radical new technology, Lorna also chose two with conventional mirrors from the outgoing model line.

In the event, even those drivers with the strongest reservations were quickly convinced by the benefits of the new cameras. And while the mirrored Actros are half a mile per gallon more economical than C&D South West’s fleet average, the units with MirrorCam and the latest version of Mercedes-Benz Trucks’ fuel-saving Predictive Powertrain Control system are even further ahead.

A third-generation family business, and a founder member of the PalletForce network, C&D South West is based in Chard, Somerset. The operator’s fleet of 32 trucks is dominated by a single brand – the Actros are its first Mercedes-Benz vehicles for the best part of two decades.

All four are 2545LS models with 12.8-litre, in-line six-cylinder engines that produce 450 hp. They have flat-floored, 2.5m-wide cabs – the new-generation units are aerodynamic StreamSpace variants, and those from the previous range are BigSpace models. The subject of Mercedes-Benz Finance contract hire agreements, they are being inspected and maintained at City West Commercials’ aftersales facility in Highbridge.

Charles Hammond and his son Darren established the former C&D Transport in Sheffield in 1987. The change of name to C&D South West followed its relocation to Somerset in the late 1990s. Lorna Hammond moved into the hot seat last year, at which point her father Darren took up the role of Chairman. Her twin sister Cayla is the company’s HR & Finance Manager.

“We therefore looked in detail at products from three manufacturers, one being the incumbent, and trialled demonstrators from each. Mercedes-Benz blew the other two out of the water in terms of technology. When it came to safety features, for example, the others were nothing like as advanced as the Actros.”

MirrorCam stood out for me, and was a big part of the appeal of Mercedes-Benz. However, some of our drivers were sceptical and reluctant to make the change, which is why we decided to split the order.

C&D South West’s tractors are double-shifted and assigned to a combination of general nationwide haulage and PalletNetwork trunking duties. Lorna Hammond confirmed: “All four of our Mercedes-Benz trucks are doing exceptionally well on fuel, but especially the new-generation models, which is just as we expected.”

The company’s 10 non-Mercedes-Benz units average 9 mpg. The Actros with mirrors are returning 9.49 mpg. Those with MirrorCam and the latest version of Predictive Powertrain Control, which manages gear changes to optimise fuel economy, are at 9.64 mpg.

Lorna continued: “As we enter a new decade, we’re keen to embrace the latest technology and reinforce our image as a business that is fully committed to safety and efficiency. The Actros are performing superbly, and City West Commercials has also impressed. The Dealer’s team are proactive, and keep us fully informed and up to date in terms of workshop visits.”

How the MirrorCam System Works

Images from MirrorCam’s cameras are relayed to screens mounted on the cab’s A-pillars. The system provides much improved rear visibility – for example, it cleverly ensures that the trailer always remains in the centre of the screen, even during tighter turns, and distance lines enable the driver to better estimate the position of following traffic when changing lanes or overtaking.

MirrorCam also eliminates the forward-facing blind spots caused by conventional mirrors, and because the cameras’ compact and streamlined housings create so much less wind resistance cuts diesel consumption by approximately 1.5%.

“Six months down the line even those drivers with the strongest reservations have been won over to the amazing visibility and other benefits of MirrrorCam,” continued Lorna. “Big, comfortable, well equipped and offering plenty of storage, the Actros cabs are also particularly popular with the guys who have nights away.”

Kevin Fillary joined C&D South West 10 years ago, and with the company’s support secured his Class 1 licence in 2017. “I really wasn’t sure about MirrorCam at first,” he admitted. “However, City West Commercials’ handover specialist encouraged me to trust the system, and I very quickly came to appreciate how much better it is.

“Rear visibility is great, and I like the fact that because the screens are inside the cab they don’t mist up when it’s raining. What’s more, the blind spots you get from mirror assemblies have gone completely, which is fantastic!

“I also use the Predictive Powertrain Control system all the time, so the Actros practically drives itself. The incredible technology on this truck takes a lot of stress out of the job, and makes the experience at the wheel far more relaxing. I love it.”