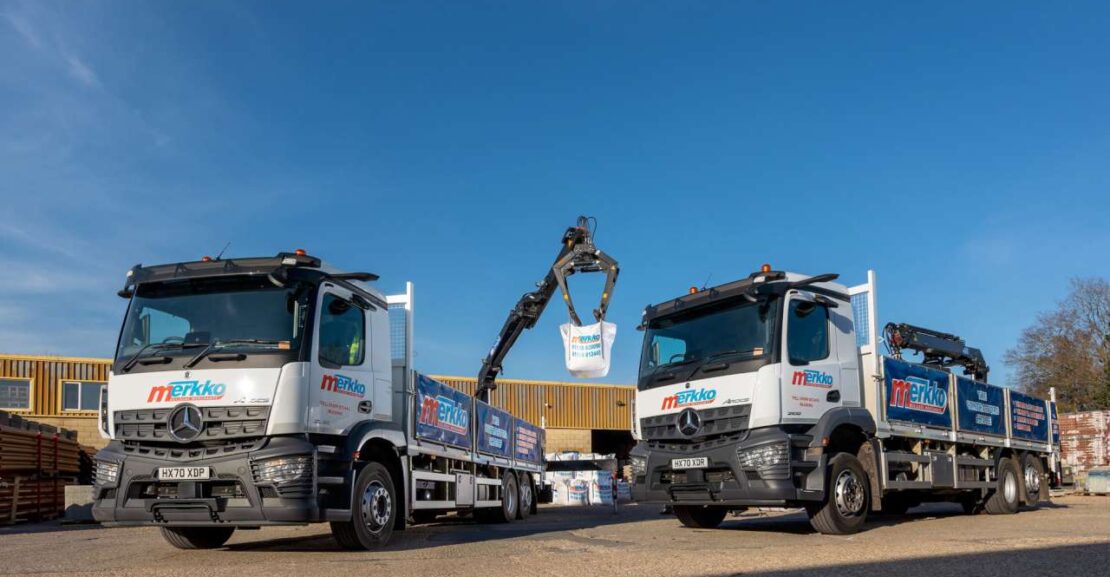 Gaining almost 10% on payload is reason enough to change your truck for a newer model, added to a business upturn meant that Builder’s merchant boss Ian Duckitt  had the confidence to invest in a pair of new Mercedes Arocs 2532 crane trucks.

Established by Managing Director Mr Duckitt in 2007, Merkko offers a range of heavy construction materials. from its original site in Abingdon, Oxfordshire, and the branch in Aldermaston, Berkshire, it opened in 2013.

The 6×2 Arocs were supplied by Marshall Truck & Van and are being inspected and maintained at the Dealer’s Andover workshop under eight-year Mercedes-Benz Complete Service Contracts. Both are 2532 L models with ClassicSpace M-cabs and rear axles that lift and steer, reducing tyre wear and enhancing manoeuvrability when working on sites with restricted access.

Acquired with funding support from Mercedes-Benz Finance, the new trucks are powered by 7.7-litre in-line six-cylinder engines that produce 320 hp. Horton Commercials, of Ferndown, Dorset, built their dropside bodies, while the rear-mounted, remote radio-controlled cranes are by HMF and fitted with Kinshofer brick and block grabs – an automated setting on the Arocs’ rear air suspension system ensures stability while the cranes are in operation.

The new trucks are now working alongside Merkko’s four other six-wheelers; one is a Mercedes-Benz Axor that was first registered in 2007 and has provided reliable service since Mr Duckitt bought it six years later.

Merkko serves small- to medium-sized trade customers, including groundworkers, builders and construction firms. The trucks deliver some 80% of the bricks, blocks, cement, timber and other materials it supplies, to sites within a 50-mile radius of each branch.

Its decision to remain open throughout the pandemic, particularly during the first lockdown, when bigger, better-known competitors closed their doors, has paid dividends. “We picked up a lot of additional business and were exceptionally busy during that period,” recalled Mr Duckitt. “I’m pleased to say that the majority of the new customers we attracted have stuck with us.”

He continued: “The experience of buying and running a pair of trucks by a Swedish manufacturer had not left me feeling particularly valued, so on the recommendation of a business associate I invited Marshall Truck & Van’s Sales Executive Bill Kingsmill to come and see me.

“I’ve been in the builder’s merchant business for many years, and recall visiting the manufacturer’s factory in Germany back in the 1980s, shortly after I’d ordered my very first truck. I was amazed to learn how far the technology of today’s Mercedes-Benz range has moved on.

“Bill really impressed with the depth of his product knowledge and attention to detail. I was also pleasantly surprised by the competitive quote he then produced. It’s enabled us to acquire two top-quality, technically superior vehicles, without paying a price premium.”

Merkko’s Arocs offer payloads of 13.5 tonnes. “That’s a tonne more than we were getting on the trucks they’ve replaced,” said Mr Duckitt. “I don’t know how much of that weight saving is down to the chassis, how much to the body and how much to the crane, but in truth I’m not bothered. All that matters to me is that as specified by Bill these vehicles offer an increase in carrying capacity of a magnitude that’s already making a big difference in terms of productivity and cost control.”

Mr Duckitt added: “The drivers of these new trucks are both highly experienced; one’s 62 and has always been a big fan of a Swedish truck brand, and the other’s 68. They do say ‘You can’t teach an old dog new tricks’, so I’ll admit to having been a bit concerned about how they’d react to all of the technology on the Arocs.

“I needn’t have worried. Both are really pleased with their trucks and neither has raised a single complaint. A lot of our work takes them down narrow country lanes – I’d like to think that where broken mirrors have always been an issue in the past, the fact that the MirrorCam cameras are smaller and fitted at roof height means we’ll also benefit from a reduction in damage costs.”

All Mercedes trucks for sale

All Mercedes Arocs trucks for sale