Home > Problems with the Overhead Lines!

Problems with the Overhead Lines!

How many times has a poor station announcer had to tell waiting passengers that there is an issue with the overhead lines on the UK’s otherwise excellent rail network?

We even hear it on the travel news on the radio when the subsequent delays are significant enough.

They can’t suffer from the same issues on the German rail network, not only because there are never any delays, but also because they are considering overhead power lines for their motorway network.

“This pilot project fits well with our commitment to use all resources responsibly,” says Knauf Group Manager Christoph Dorn. “We hope that this will provide insights that can help us make our logistics processes even more sustainable, especially in metropolitan areas.”

The other four catenary trucks are being operated by Schanz, Meyer Logistics, Contargo and Merck. With all five trucks now in daily traffic along the five-kilometre electrified segment on the A5 motorway, data will be collected for several studies to examine the benefits of e-roads.

“A five-kilometre test track in both directions on the motorway may seem very short but the aim is to test the technology,” says Heinrich Kerstgens, Co-Managing Director of Contargo, which in June received the third Scania hybrid truck for the pilot project.

“If the feedback is positive, and if about one-third of the German motorway network is equipped with electrified catenary lines, in future approximately 80 percent of the heavy trucks registered in Germany will be able to operate in an electric mode using this technology. That will make a really significant contribution to reducing carbon emission,” explains Kerstgens.

The A5 motorway segment in Hessen is one of three tests with catenary lines being conducted in Germany. The second road segment was opened in Schleswig-Holstein (A1) at the end of 2019 and the final trial will start at the end of 2020 in Baden-Württemberg (B462). 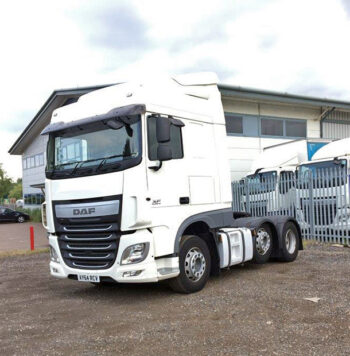