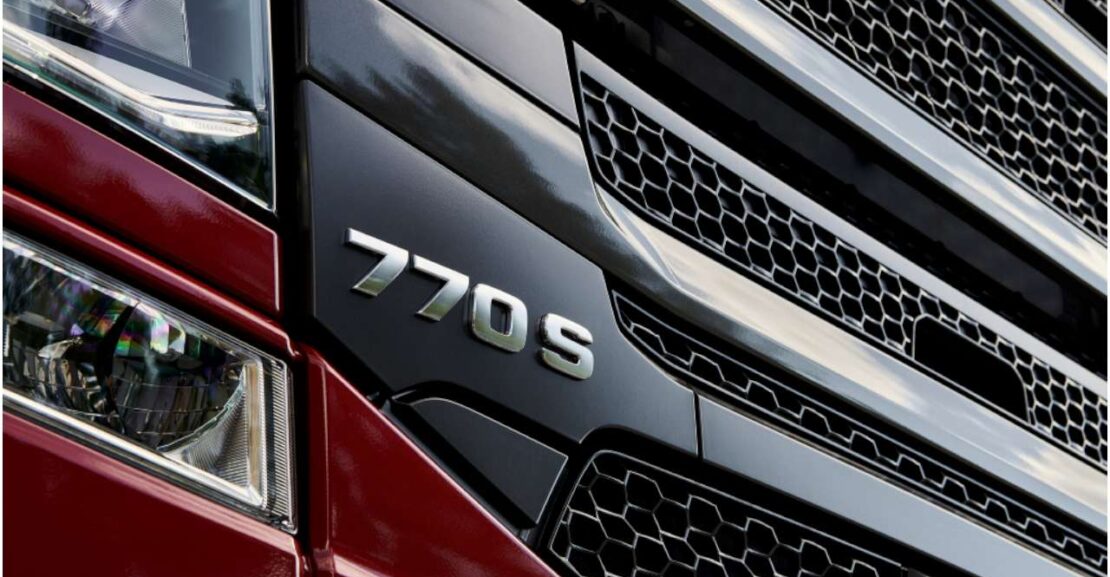 This is big news.  Scania have revealed their new V8 with more power and better fuel economy.  The new Scania V8 now takes the title of the most powerful truck in series production in the world with 770hp.

Replacing the outgoing 730hp V8, Scania leapfrogs fellow Swede, Volvo with ‘just’ 750hp in their flagship FH750 to take the world’s top power truck title.   Scania remain the only truck manufacturer at present that have a ‘V’ engine in their current truck range.  Even more impressive is the 770hp model achieves this using SCR only – no EGR in sight.

This leaves other manufacturers somewhere in the distance – MAN with 640hp, Mercedes with 620hp, Iveco stops at 570hp, DAF at 530hp and Renault at 520hp.

Scania is launching four new V8 models in power outputs of 530, 590, 660 and the record 770 horsepower. In addition to the increases in power, the new engines deliver fuel savings of up to 6 percent when combined with Scania’s new gearbox range and cruising back axle ratios.  The engine savings on its own add up to a more meagre 2 per cent, whilst the gearbox ads a further one percent, leaving three percent for the faster rear axle ratios when cruising.

How can you tell the new truck is a ‘new’ V8? Well, it’s subtle.  You would have to look at the slightly revised grille and seek out the additional chrome above the windscreen.

Dates for your Diary

The 770 horsepower unit will be available for production in late December 2020 with the 530, 590 and 660 horsepower variants units following in February 2021, with the first examples of the new engines set to enter service in the UK during the first quarter of the year.

Chequebooks Out for the Limited Edition – Flying Griffin Launch Editions

There will be only 16 fully-loaded 770S tractor units (Thanks to Mercedes Cars not the S770) available for pre-order with Griffin packs. The lucky buyers will be able to dazzled by the lights of the Scania support centre at Milton Keynes and receive an airbrushed electric guitar!?  The 50th anniversary edition sold out in four days, so be quick.

“Our V8 engine has a tremendous following and these new models are sure to attract interest from operators across a variety of sectors,” comments Vincente Connolly, UK Sales Director for Scania (Great Britain) Limited.  “The range is ideally suited for heavy haulage customers and those working in the most arduous conditions, such as forestry and other on-off road applications.  Our V8 is also extremely popular among long-haul operations who run at high gross train weights for extended periods of time.  Then, of course, there are operators looking to make a statement with a flagship model for their fleets.  The Scania V8 has long been the preference of many here – it’s an engine which definitely stirs the emotions! – and the new range-topping 770 horsepower variant is sure to raise the aspirational bar even higher.”

The total fuel savings for vehicles equipped with a new V8 engine can reach six percent – or even more – under the right conditions when the new G33CM Opticruise gearbox (which can be specified on 530, 590, 660 horsepower V8 variants) is included in the powertrain.  Engine-derived fuel savings in the region of two percent are the result of extensive fine-tuning and development by Scania’s engineers, involving technologies in the forefront of internal com­bustion engine development.

Among them, and provided by more than 70 new components, are re­duced internal friction, higher

compression ratios, improved aftertreatment-systems and a new powerful Engine Management System (EMS).  In accordance with the fuel savings, the new engines offer a corresponding reduction in emissions of carbon dioxide.

The new engines also feature a wider torque spread which allows the rear-axle gearing to be altered for lower revs.  This enables fuel savings of up to three percent, depending on the application and operating conditions.  The final one percent saving comes from the improved design of the new gearboxes.

Both the new engine and gearbox have been on a diet and are 75kg and 60kg lighter respectively.  This improves payload and helps operational efficiency.