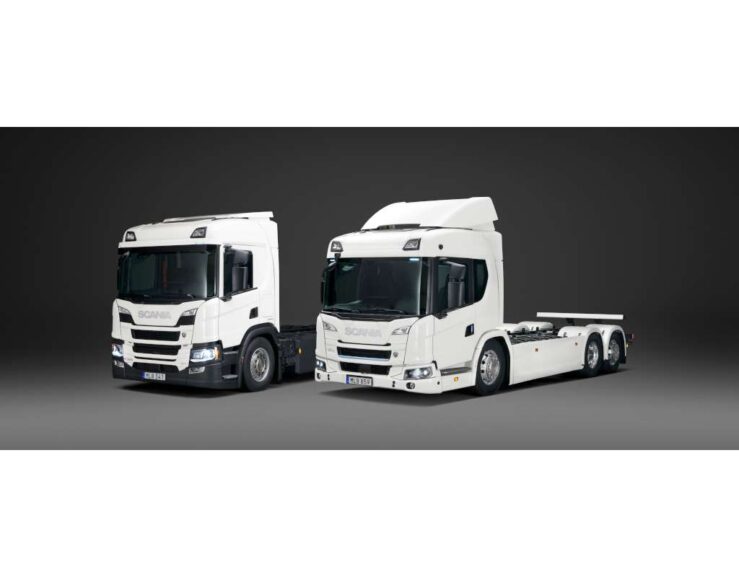 Scania has embarked on its electric journey with the trucks most used for local distribution and municipal roles – the P – Series and low entry cabbed L-Series.

The company says that it will roll out new models every year from now on until the range is complete – including long distance haulage.

For the operators that are keen to go green, but not yet ready financially or operationally to take the fully electric plunge, Scania are also offering a plug-in hybrid version.

So with either the normal cab or the low-entry L-Series cab, you can choose between two different batterie packs (effectively the size of the fuel tanks) with a choice of 165 or 300 kilowatt hour (kWh).  No doubt there will be a significant price differential between the two offerings.  These batteries will power the truck’s 230 kilowatt (kW) electric motor, which is equal to approximately 310 horsepower.

Five batteries are used for 165 kWh, with nine batteries employed for 300 kWh. With the combustion engine removed, one battery is placed in the former engine tunnel with the remaining four or eight batteries placed along the chassis side.  In 300kWh format, a range of up to 250 kilometres can be achieved on a single charge.

The batteries can be charged by 130 kW DC using a Combined Charging System (CCS) connector, (the same used by the Jaguar iPace). The charging time from zero to 80 percent is approximately 40 minutes for the five-battery option and approximately 65 minutes for the nine-battery option. In addition, the batteries are continuously charged in motion through regenerative braking energy.

As the plug-in hybrid truck also has a combustion engine, the available space for batteries is less than the fully electric truck. The plug-in hybrid is equipped with three batteries for an installed capacity of 90 kWh for its 115 kW electric motor. The charging time from zero to 80 percent is approximately 35 minutes.  In addition to charging via regenerative braking energy, battery power can also be topped up during loading and unloading. The electric powertrain is combined with combustion engine options ranging from 280–360 horsepower. The vehicle’s range in electric mode is 60 kilometres.

“It is with a great deal of pride that we announce the start of Scania’s long-term electrification commitment,” says Scania’s President and CEO, Henrik Henriksson. “Looking ahead, we will annually launch electric vehicles for the entire product range, and we are presently reorganising our production towards that end. Of particular significance is that in a few years’ time we will also introduce long-distance electric trucks adapted for fast-charging during drivers’ compulsory 45-minute rest periods.”

For Scania (Great Britain) Limited, UK Sales Director Vincente Connolly adds: “With a proven record in delivering premium diesel and renewable fuel trucks, this launch marks a significant step in Scania’s development. Over the coming years, we will continue to develop our range of electrified vehicles for all applications, including long-haulage and construction.  Electrification of the heavy commercial truck fleet is decisive in reaching the Paris Agreement target of limiting global warning to under 1.5°C.  E-vehicles will therefore increasingly become an attractive option and we will, in the initial stages, develop and deploy hybrid and fully electric trucks in partnership with progressive operators who share our ambition and commitment to sustainability.”