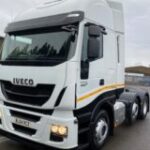 You will always find plenty of used Iveco Stralis trucks for sale at Truckpages.  Iveco’s top weight truck from 2002 until its replacement, the S-Way, arrived in the UK in 2021, the Stralis has been undervalued in the UK – especially in the used market.  This means that canny UK truck buyers should be able to buy a lot of truck for their money.

The Stralis covers the weight range from 19 tonnes GVW to 44 tonnes – both rigid and articulated. The choice of cabs means that urban distribution can be more effective with the 2.28m wide ‘Active Time’ and ‘Active Day’ cabs and long haul transport suited to the 2.48m wide Active Space Cab.

Later Stralis trucks are well designed and engineered and post-2013 versions have the benefit of using SCR only to reach Euro 6. This means no complicated EGR systems that feed the hot exhaust back into the engine that most other truck manufacturers rely on.

Check out the gas versions of the Stralis – either compressed or liquified natural gas (CNG/LNG) that can make a real and immediate impact on the environment in terms of both well to wheel emissions and noise.

Launched as far back as 2002, it used the structural body of the outgoing EuroStar model but a new exterior and interior.  The Stralis introduced a choice of cab widths – the 2.28m Active Time/Active Day as well as the 2.48m Active Space Cab.  A choice of Cursor 10 or Cursor 13 engines with the 6-cylinder, 10-litre Cursor 10 offering outputs of 400 to 430hp and the 13-litre 6-cylinder Cursor 13 with 480 or an impressive 540hp.

As with all truck makers, Iveco had to update the Stralis for the new regulations.  The big difference was that the Stralis reached the standards only using SCR to clean up emissions, whereas nearly all the other manufacturers used a combination of EGR and SCR.

This meant less reengineering of the cab for increased cooling and a lighter overall truck. Not to mention the money saved in R&D in changing the cab and installing an EGR system.

With re-engineered motors, the XP was launched alongside Iveco’s natural gas-powered Stralis NP.  Complete with all-new rear axles and a new-generation, 12-speed ZF automated transmission – the ‘Hi-Tronix’ and a revised, lighter rear suspension set up, fuel consumption was greatly improved over the original Euro 6 model – Iveco claimed by nearly 10%.

With a brand-new cab, Iveco took the opportunity to rebrand their flagship top-weight truck the S-Way.  With improved aerodynamics, Iveco claim up to 4% fuel improvement on the old Stralis cab and details such as improving braking distances by up to 15%.  Few changes to the driveline from the 2016 upgrades, but the truck looks a lot more modern and would grace any fleet.

The Launch of the Euro 6 Iveco Stralis Hi-Way 2013

How Fast is Your Stralis? Quicker than an Alfa? 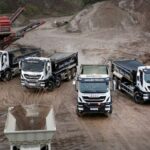 With local tipping work it’s all about payload, payload, payload.  Alongside dealer service, Totnes, Devon-based Jeremy Bishop Haulage says that the extra payload the Iveco Stralis X-Way is giving them is the main reason for buying Iveco. L-R Will & Jeremy Bishop in front of their Iveco tipper fleet This means that the company has doubled its IVECO fleet by taking delivery of two Stralis X-WAY 26-tonne 6x4 tippers (AD260X42Z OFF) with Active Day (AD) cabs. The two 6x4s join the two 480hp Stralis X-WAY AD340X48Z OFF 32-tonne 8x4 AD-cab tippers which were delivered to the operator in May. How… 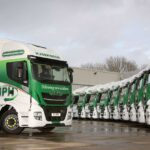 This is good news for the natural gas-powered truck initiative. If a haulage company buys the same truck again at the end of a 30-month contract, then it must have worked well. No small haulier can afford to be a charity or so altruistic that they are prepared to operate trucks that are not up to the job. So the champagne corks must have been popping in Iveco's Basildon HQ when the order came in from Preston-based H Parkinson Haulage (HPH) for seven 460hp IVECO Stralis NP AS440S46T/P CNG 4x2 tractor units.  These trucks replace seven of the lower-powered Stralis… 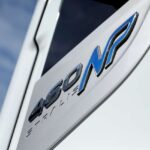 No doubt buoyed by the shot in the arm for all online shopping throughout the COVID lockdown, Ocado are splashing out on some new trucks this year. Not a huge truck operator (plenty of vans thought), the company only has around 170 trucks.  However, the impressive statistic is that a third of the company’s trucks run exclusively on natural gas – all of them Iveco Stralis NP tractor units. This percentage is increasing with 20 out of the most recent order of 31 trucks being powered by CNG (Compressed Natural Gas – as opposed to the denser and more costly…

Iveco have been banging the ‘natural gas trucks’ drum for a few years now.  The company is focusing heavily on making their Stralis tractor unit range the number one for LNG and CNG operation across Europe.  This may be their strategy to get more Stralis tractor units on the road full stop, as the company has not been hugely successful in this regard outside of Italy. Nicholls Transport and Gasrec have opened a refuelling station for pumping liquified natural gas (LNG) in Kent, to support an initial order for 10 Stralis NP 460 6x2 tractor units… 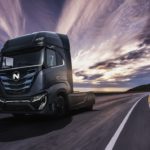 The results of three months work since the joint agreement was signed between Iveco and Nikola to convert S-Way trucks into battery electric vehicles (BEV).  Perhaps we should start calling them Battery Electric Trucks (BET – sounds better than BEV)? So far they have released images of the scale model – or maquette – of the truck.  The outward appearance of the truck should not look too dissimilar to the standard S-Way as the changes are all skin deep. Iveco are providing the tech behind manufacturing a truck and…