The smaller sibling of the Volvo FH, the FM shares much of the underpinnings of the larger brother, but fitted with a smaller cab for lightness and accessibility for shorter distances and multi drop work.

The Volvo FM is a popular truck in the UK for tipping work, configured as a day cab 8×4 eight wheeler, although since the introduction of the construction specialist FMX model, the FM tipper has tended towards the lighter end of the tipping spectrum.

No stranger to distribution work, many FM rigids are seen in urban environments – usually in supermarket livery.

Many truck buyers use the model FM13 for these trucks – this was never a model made by Volvo – when the 13-litre was introduced they dropped the first numbers and just used the power in HP.  So instead of an FM13.440 it is an FM440.

Introduced as recently as 1998, the FM was launched by Volvo to appeal to operators where the FH cab is too high and heavy for their operation. Typically high payload, local distribution, such as fuel tanker and tipper work fall squarely into these categories.

A totally new model series is big news for a truck operator, even if the underpinnings are largely the same as the FH model.

As there was such a choice of engines, Volvo used the swept volume of the engine as part of the model – so the 7-litre rated at 250HP was the FM7.250, for example. There was also the FM10 and the FM12.

Only three years after launch, the FM was given an overhaul in the engine department.  The range went from a choice of three engines to a choice of two.  This was a positive step, as the ageing 7 and 10 litre engines were replaced by the ultra-modern 9-litre D9A.  In addition, Volvo introduced the I-Shift automated gearbox which appeared in the FM at the same time as the FH.

The new 9-litre used the same design principles as the already successful 12-litre.  The old pushrods were replaced by overhead camshaft and four valve heads.  These new 9-litre FMs were available in power outputs from 300 to 380HP

The D12D in the FM12 was given more power – now with 460HP (Compared to the 500HP launched at the same time for the FH using the same engine).

Alongside a revamp and the replacement of the D12 with a new 13-litre D13A engine, Volvo decided to change the naming protocol for all their trucks.  The FM was no exception with the company dropping the swept volume from the model.  So the FM9 and FM12 changed to simply FM, (not FM13 which many operators and dealers insist on calling them).

As far as the emission standards went, both the 9-litre and the 13-litre were available at Euro 4 (Euro IV) using SCR to clean up the emissions.

The I-Shift automated transmission also got an overhaul as the second generation was launched.

To compete with MAN and their ‘Add Nothing’ campaign at Euro 4, Volvo launched an EGR version of the FM that required no Adblue to meet the Euro 4 legislation.  This D13B engine was available alongside the existing SCR models, albeit at lower rated horsepower from 360to 440HP.

With revised styling and changes to the engine lineup, the 2010 changes took place alongside the launch of the FMX – the heavy duty construction version of the FM cab.

The second facelift for the FM in three years was more major, as it formed part of the range renewal prompted by the introduction of Euro 6.  The FH was the first to receive the treatment with the FM coming along a year later.

The FM received some new electronic gadgets, such as the Volvo Dynamic Steering (optional) plus some changes to the chassis including new engine mountings and improved suspension.  The FM also went on a diet as Volvo managed to strip some weight across all models in the range.  The FM’s full range of 11- and 13-litre engines were available from the Euro 6 launch. The D13 was available from 420hp to 500hp, while the D11 engine spanned the power range from 330hp to 450hp.

2020 A Brand New Cab and Many Upgrades

Not on the roads until the end of 2020, February 2020 saw the reveal of the long-awaited new cab for the FM. Only slightly larger than the outgoing FM cab, the new version gives the driver much more room in the cab – both in day and sleeper forms.

There were technological improvements in the displays – gone are the old-fashioned dials which were replaced by flat screens (a 12inch to replace driving dials and a 9 inch to control cameras, music and sat nav). Plenty of safety tech for the new FM including a smarter version of the adaptive cruise control that can not stop the truck totally when following traffic that stops. 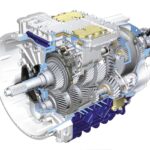 Volvo Trucks have a Gearbox Anniversary

Not a headline you thought you would ever see, let alone want to read.  However, the introduction of the I-Shift transmission back in 2001 was a bit of a game changer. Prior to this time, most drivers had to manhandle manual gearboxes with some 16 or 18 speeds with range changes and splitter switches.  It made the job very tricky when ending up with a box full of neutrals. Along came Volvo and suggested that an automated gearbox may be able to do the job better and take this strain away from the driver. Prior to this, automatic gearboxes were… 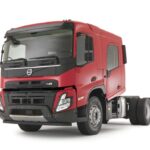 Everyone likes a shiny new fire truck.  It seems that Volvo is no exception.  The company is after the lion's share of Europe’s 3,000 new fire trucks built each year with the launch of two suitable variants of the FM and FMX. The Available Axle Configurations are 4x2 or 4x4 Crew Cab Fire Trucks The new Volvo FM and Volvo FMX trucks are now available for use as Fire Service vehicles with a crew cab for up to nine people. The new variants of the two models, developed in close cooperation with bodybuilders and the emergency services, have a number… 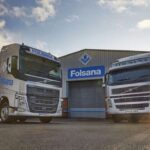 You know a truck has performed well if it gets to 1,000,000 kilometres and the operator just goes to the dealer to buy a new one. No fuss, no shopping around, no back to back demonstrator trials – just go and buy a new one. Operating from the firm’s headquarters in Bolton it will be on the road five days per week That’s what metal component manufacturer and supplier, Folsana Pressed Sections, has done. They have replaced their 15 year old Volvo FM12 that has been on its fleet for 15 years, covering nearly 1,000,000 km with a new Volvo… 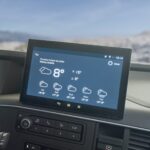 If you would have asked me even just ten years ago what the chances would be of an online book retailer supplying devices that help the driver to control heavy duty trucks, I would say zero. How wrong I would be.  It seems that Amazon are taking over every aspect of the world.  From your shopping delivery to computer storage, data, e-readers, TV to name just a few areas. So, close on the heels of Iveco’s announcement that they are to be fitting Alexa in the cabs, Volvo Trucks tell us that they have already gone an done it. The… 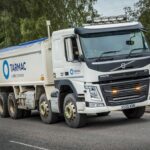 Every company has different reasons for buying a particular truck.  Sometimes it is based on the relationship with the local dealer, other times on fuel economy, and often purely on price. Nuneaton-based ASB Transport is no different, but a key motivation for buying Volvo (again) is the higher residual value compared to the competition. The company has taken delivery of two new Volvo FM460 8x4 tippers, citing the fantastic support from the manufacturer’s dealer network as an additional reason for this latest order. Volvo FM460 Tipper - on Breedon Aggregates Contract The Volvo FM460 Spec Supplied by Richard Moorse, Regional…