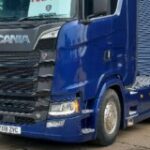 We are supposed to be calling them Scania 730S thanks to a court ruling in Mercedes favour. Even though it says 730S on the cab everyone is still following the rest of Scania’s model naming and actually calling them S730 trucks.

Whatever you call them, this is the top model (in the UK at least) of Scania’s flagship truck model.

First seen in 2016 it took some years to arrive on the UK’s roads in right hand drive form.

Using Scania’s V8 16-litre ending the 730hp is too much for UK operation.  It comes into its own over some seriously mountainous terrain.   That won’t stop plenty of people wanting to own the most powerful Scania around, however.

Sorry, your search returned no results