Available from 2018 in the UK, The top powered DAF XF530 was sold as a Space Cab as standard with a Super Space Cab as an option.

There were three Transmission choices at the time of 2017 launch.  The choices of gearbox to look out for are the standard 12-speed TraXon 12TX2620 DD, 16.69-1.00 or the upgraded, optional 16 speed TraXon or even the 16 speed manual for the old school.

Whilst most of the XF530 trucks you will find on Truckpages will be 6×2 tractor units, users could also specify a 6×4 unit for heavy haulage or simply added traction.

The rarities will be finding a rigid with the 530 engine.  They were made, but would typically be built with expensive bodies with even more expensive cranes on – so expect them to be kept by their first owners for many years.

View All DAF Trucks for Sale...>

Not found the DAF truck for sale that you were looking for? Try a different model group from the list below. These are the main model category groups.

View All DAF Trucks for Sale...> 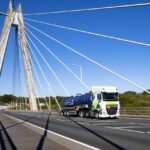 The sale of four DAF XF530 6×2 tractor units to Hazrem Environmental in South Wales has resulted in the operator going from having no DAF trucks on the fleet at all to the brand making up the majority of trucks on the fleet. The deal was closed after the company received strong endorsements from DAF… 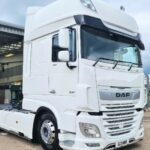 Work hard, play hard.  That is the message from Flintshire Transport Services who have taken delivery of their super-spec DAF XF from Motus Commercials in Stoke. Their new truck has to graft all week on general haulage with no time off at the weekend as it tows the trailer containing the company’s Porsche racing car….