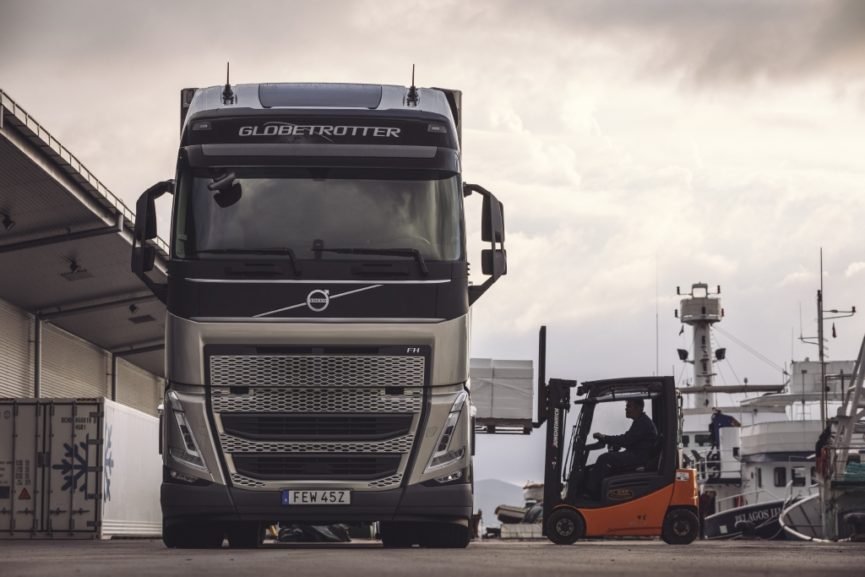 When there is the launch of a facelift, as has recently happened to the Volvo FH, it is telling that a manufacturer mentions the changes to the driveline right at the end of the information they release.

What it is telling us is another question.

Volvo’s facelift of their Volvo FH, which was revealed in February 2020, appears to have had one overriding objective: get the drivers on side.

We hear a lot about the interior of the cab, the 12-inch display, motion sensor controlled lighting, a further 9 inch display for infotainment but only much later do we discover the potential for 7% savings on fuel.

Volvo Trucks make no secret of the fact that it is looking to woo the driver with the new truck. The company’s president, Roger Alm, tells us:

A good driver can make a huge contribution to our customer’s profitability. Around the world we see a chronic shortage of truck drivers. By launching this new truck which prioritises the professional driver’s productivity and comfort, we have taken an important step forward in helping our customers attract and retain the best drivers.

So, the dashboard has been redesigned and Volvo have gone to town with the display screens.  The main display console, where you would expect to find the tacho and rev counter, is a single 12-inch screen. This is the important one that looks after all the major driving functions and warnings. Surrounding the screen is largely open space that the driver can use for storage – hopefully not storing things that will obscure the important part of the dashboard.

There’s another screen sitting proud of the top of the dashboard that controls the infotainment, navigation and viewing the truck’s inbuilt cameras. On the subject of cameras, unlike in the new Mercedes Actros, Volvo have decided not to take the route of losing the rear-view mirrors in favour of rear-view cameras.

The driver can use the touchscreen – or if the truck understands him, then simply talking to it is an option – although has anyone ever got this function to work in a car or truck yet?

Maybe they have, as Volvo Trucks have a “ Chief Designer for User Experience and Human Machine Interaction” – a lady called Carin Larsson. She is the brainpower between separating the driving functions away from the less important stuff.

Volvo’s famous I-Shift has a new selector that means moving around the cab is easier and, if the truck operator particularly loves their drivers, they can opt for a whole series of customisation options with new fabrics and colours.  These options will be taken perhaps more frequently by the owner operator than a fleet truck buyer.

There are some exterior changes, the headlights for a start.  The V-shaped headlights have now been moved outwards to align with the feature line of the cab doors. The turn indicators have also been moved to the door, giving the truck both improved aerodynamics and a more confident look. Volvo have also increased the size of the logo on the front.

The Volvo FH will now take itself off high beam automatically to prevent blinding oncoming traffic.  Descent control will allow a maximum speed to be set by the driver and the adaptive cruise control will work all the way down to standstill.  The emergency braking, stability control and collision warning all come as standard, whilst new FH buyers can also opt to pay extra for lane keep assist and stability assist.

Safety on the new Volvo FH is further improved by the road sign recognition system that is able to detect road signs such as overtaking restrictions, road type and speed limits.

The visibility can be improved further by the addition of a passenger corner camera that provides a complementary view of the side of the truck on the side display.

And now for the fuel savings…

Volvo are pushing the I-Save feature on the new FH.  They claim that, in long-haul operations, the new Volvo FH with I-Save for Euro 6 combines the new D13TC engine with a package of features and can deliver fuel savings up to 7%.  Looking at the small print, Volvo are comparing costs of diesel and AdBlue for D13TC Euro 6 step D with the Long Haul Fuel Package (I-Save) to D13 eSCR Euro 6 step D without the Long Haul Fuel Package.

The wide range of options in terms of the vehicle’s layout can benefit operators with particular duty cycles and applications.  The new FH can have increased front axle loads, as well as tag and pusher axles with improved steering angles to reduce tire wear and improve manoeuvrability. The truck is also available with Tandem Axle Lift, enabling the rear axle to be disengaged and raised when the truck is not loaded, reducing the fuel consumption.

Volvo FH with I-Save for Euro 6

All Volvo trucks for sale

All Volvo FH trucks for sale