Volvo Trucks have a Gearbox Anniversary 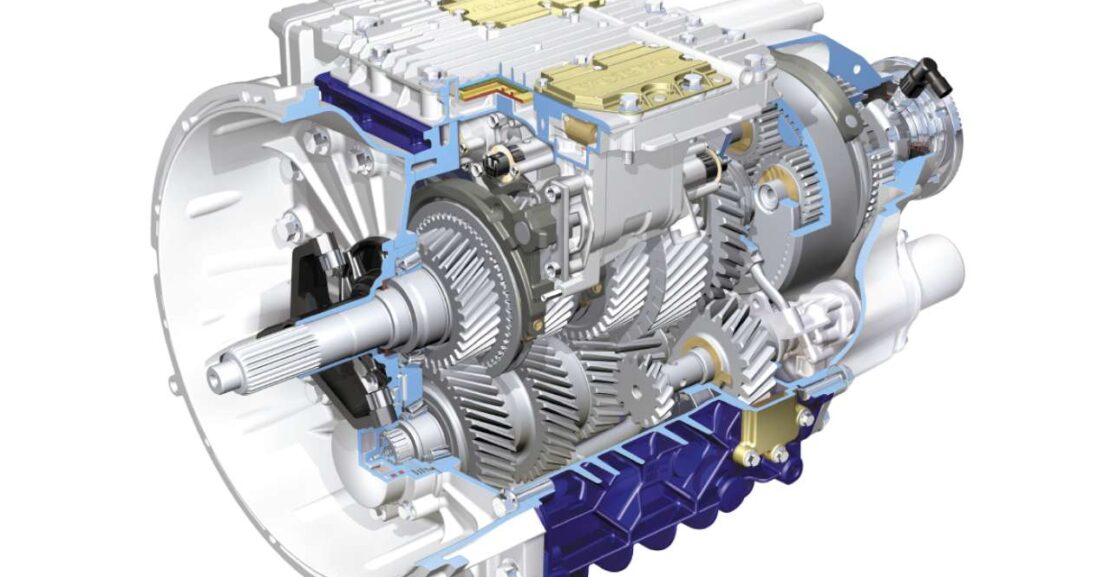 Not a headline you thought you would ever see, let alone want to read.  However, the introduction of the I-Shift transmission back in 2001 was a bit of a game changer.

Prior to this time, most drivers had to manhandle manual gearboxes with some 16 or 18 speeds with range changes and splitter switches.  It made the job very tricky when ending up with a box full of neutrals.

Along came Volvo and suggested that an automated gearbox may be able to do the job better and take this strain away from the driver.

Prior to this, automatic gearboxes were relatively heavy and inefficient for long distance transport and were only used on urban operations such as refuse trucks and buses.

The I-Shift changed all this as it retained the operating mechanism of a manual gearbox with its efficiency, but developed a robot to change gears instead of relying on the driver.  This type of gearbox is better known as an ‘automated manual transmission’ (AMT). It has a positive impact on fuel consumption, vehicle performance, safety and driver comfort.

By the end of 2020, more than one million Volvo trucks around the world had been sold with I-Shift. And, as the company marks its 20th anniversary, this breakthrough powertrain technology is still being developed for future gains.

When I-Shift was first launched in 2001, Volvo Trucks confirmed its strong belief in a clutch-based transmission system as the most efficient design for automatic gear-changing. Today, all Volvo FH, FH16, FM and FMX trucks are fitted with I-Shift as standard. Being an automated system, I-Shift contributes to lower fuel consumption – and thereby reduced environmental impact – as well as delivering improved safety and driveability benefits such as reduced noise, vibrations and physical strain on the driver.

“I-Shift was and still is a major game-changer. We are now selling the I-Shift all over the world. In North America, we have increased from single-digit numbers in 2007 to today where more than 90 per cent of all Volvo trucks there are equipped with the technology,” says Pär Bergstrand, Heavy Duty Transmission Manager at Volvo Trucks.

“This impressive development clearly reflects both its increased efficiency and its driver appeal.”

Developed by Volvo, I-Shift is fully synchronised with the rest of the truck as the transmission uses information available from both the engine and the vehicle to work together in the most optimum way for different usages and truck combinations.

“This synchronisation is what sets I-Shift apart and makes it so versatile,” explains Bergstrand.

“I-Shift is the positive result of many years of hard work by our skilled engineers, the feedback from customers in field tests for the development process, and Volvo Trucks’ access to technological advances across the entire Volvo Group.”

I-Shift’s success lies in its ability to work with the entire powertrain. With continuous improvements over the years, the system has been developed to meet the demands of a wide range of transport applications. Volvo Trucks has continued to pioneer numerous new intelligent functions that both drivers and hauliers have come to appreciate.

In 2014, Volvo Trucks unveiled the I-Shift with Dual Clutch – a heavy-duty dual clutch inspired by the gearboxes used in racing cars, that offered an instant and immediate feeling of seamless delivery of power during gear changes.

Another significant step came in 2016, addressing heavy duty assignments that require extra torque and startability. I-Shift with Crawler gears allows a truck transporting a gross combination weight up to 325 tonnes to start from standstill on a flat road. The gear ratio enables the truck to crawl at speeds as low as 0.5 km/hr, which is beneficial when performing precision manoeuvres, for example on construction sites, when paving roads or when hauling timber.

I-See is a separate system that can be added to I-Shift. Updated in 2017, I-See supports the truck in maintaining a consistent average speed by analysing cloud-based map data about topography of the road ahead, telling I-Shift the optimum time to change gear in order to save fuel.

The launch of Volvo Trucks’ new heavy-duty range in 2020 brought the introduction of another innovative function: I-Shift with Change Direction. This enables the truck to change direction without the driver needing to use the brake pedal, a feature particularly useful for construction, forestry and mining operations where it is more productive to perform repetitive manoeuvres back and forth at lower speed.

The latest generation of Volvo trucks also further reduces fuel consumption. The new Volvo FH with I-Save – Volvo Trucks’ most fuel-efficient long-haul truck to date – cuts fuel consumption by up to 10 per cent*.

And, looking ahead, the innovative developments certainly aren’t stopping here.

“I-Shift will continue to be improved for diesel trucks and it will also play an important role in our electromobility journey. As an advanced automation technology, I-Shift offers unique abilities to contribute to Volvo’s fully autonomous transport solutions of the future,” concludes Bergstrand.

All Volvo trucks for sale

All Volvo FH trucks for sale

All Volvo FM trucks for sale

All Volvo FMX trucks for sale