Where are my Wing Mirrors on my new Mercedes Actros?

Home > Where are my Wing Mirrors on my new Mercedes Actros?

Where are my Wing Mirrors on my new Mercedes Actros? 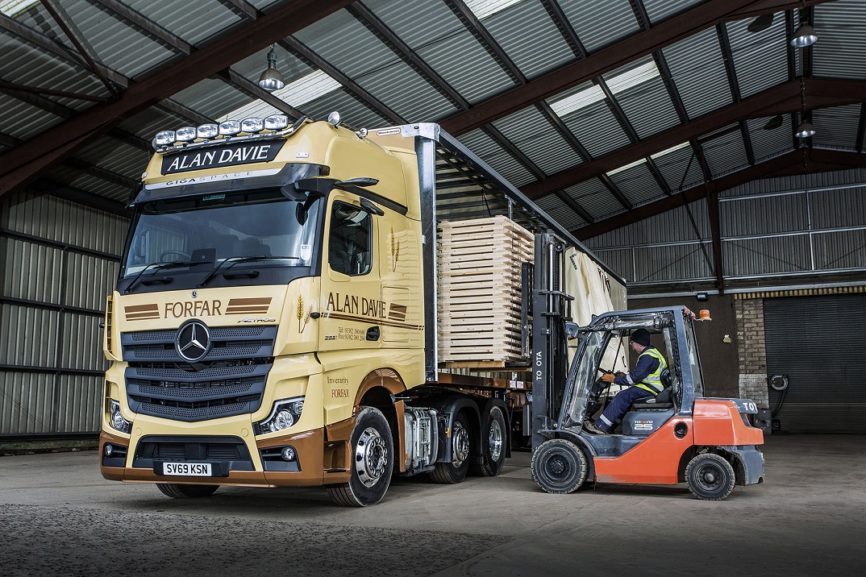 Take a look closely at the picture of Alan Davie’s brand new fifth generation Actros and you would have to agree it’s a great looking truck.  There’s something not quite normal about it, however.

To the uninitiated, it simply looks like the truck has clean, aerodynamic lines.  It’s only when told that the tractor unit has no rear-view mirrors that it makes sense.

No, Davie wasn’t short-changed, as standard on the 510hp Actros 2551 Gigaspace the mirrors have been replaced with a camera system that is much more aerodynamic, although does take some getting used to.

Davie bought his first truck in 1978. Today, the transport business operates from depots in Dundee and Forfar, and runs a mixed-marque fleet of 53 trucks, the overwhelming majority of them tractor units.

Alan Davie’s established Actros tractor units return between 8.5 and 9.5 mpg depending on the route, the load and the prevailing weather conditions. “We’re very happy indeed with those fuel figures,” confirmed Mr Davie, “but we’ll be looking for even better from our latest trucks.”

The Actros is the International Truck of the Year 2020 including Mercedes’ Predictive Powertrain Control technology which helps to reduce fuel consumption and cut emissions.

The ‘MirrorCam’ – far from being a gimmick – actually saves 1.5% of fuel according to Mercedes as they are smaller and more streamlined than traditional mirrors.  In addition, the all-round visibility is improved which helps with pedestrian safety.

Another major feature of the new Actros that helps pedestrian safety is the Active Brake Assist 5 that now uses cameras in addition to the radars to help detect pedestrians who are about to move in front of the truck.