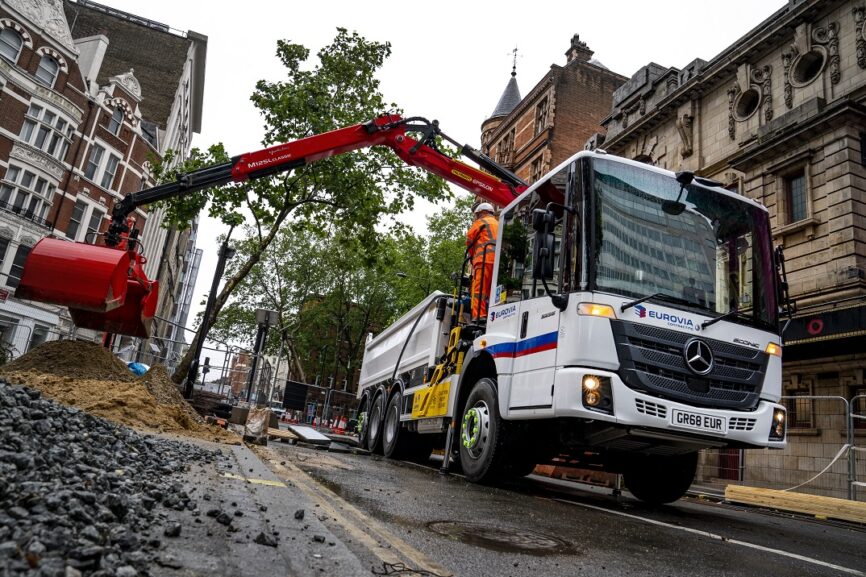 Where trucks are working across London, responsible truck operators will increasingly specify low-entry cabs, not just for ease of access, but mainly for improved direct vision and enhanced safety for pedestrians and other road users.

Long the mainstay of the refuse collection world, these low entry cabs will be specified as tippers, scaffolding, refrigerated trucks and – as Eurovia Contracting have – grab loaders.

The Mercedes Econic is one of the major players in the low entry cab market – although others are starting to play catch up.

Eurovia Contracting decided that the safety of its staff and other vulnerable road users was the overriding priority for the infrastructure business when it decided to base its latest 32-tonne tipper-grab on a Mercedes-Benz Econic.

The new eight-wheeler was supplied by north west Dealer Roanza Truck & Van, and is now hard at work in London. It is the first new vehicle of its type to enter service since the operator resolved to specify only low-entry chassis for urban tipping applications.

Like all Econics, Eurovia Contracting’s new truck has the low driving position and deep, panoramic windscreen which combine to provide drivers with a wide field of vision. This is further enhanced by the optional, bus-style folding nearside door, which is glazed to its full height and allows them to make direct eye contact with cyclists or pedestrians at junctions and in traffic, a key advantage in helping each to understand the other’s intentions.

Greater Safety is one of the three pillars of Mercedes-Benz Trucks’ all-encompassing RoadEfficiency strategy, and the Econic comes as standard with Active Brake Assist 4 emergency braking technology. Programmed to recognise other vehicles at higher speeds, as well as pedestrians when moving more slowly, this is capable of bringing it to a complete stop.

The model’s unique safety appeal has been instrumental in enabling Mercedes-Benz to secure a string of high-profile orders from the construction sector in recent years, for Econic-based mixers and skiploaders, as well as tippers and tipper-grabs. Long-established as a favourite chassis for many in the waste and recycling industry sector, the Econic has also become increasingly popular for highways maintenance operations, and, when fitted with refrigerated bodywork, food distribution. An Econic-based urban tractor unit is also available.

Fleet & Plant Operations Manager Chris Forrest said: “The great all-round visibility offered by the Econic’s cab can only help to make the roads safer for everyone. It also means that time spent at the wheel is less stressful for drivers, while the vehicle’s low entry and easy cross-cab access also enhances health and safety because crew members can always choose the best side at which to enter and exit.”

These attributes have earned the vehicle Transport for London’s highest, five-star Direct Vision Standard rating. Eurovia Contracting, whose tippers and tipper-grabs operate in towns and cities nationwide, is certainly convinced of the safety benefits.

“Direct vision is crucial to the safety of our own crews, and of the public with whom we share road space,” said Forrest. “There are no huge blind spots impeding the view from the wheel of an Econic. Drivers are also much closer to other people on the road, which means they can see so much more than is possible from a traditional, high-riding construction truck.”

He continued: “The TfL Direct Vision Standard actively encourages operators working in the capital to choose the safest vehicles. These benefits are universal, though, which is why we’ve chosen to roll out this type of vehicle for all of our urban tipper and tipper-grab operations throughout the entire country.”

As well as working with its customer to ensure the Econic was perfectly tailored to the job, Roanza provided comprehensive driver familiarisation support for the crews who are now using it. “The Dealer’s service has been first class,” acknowledged Mr Forrest. “This vehicle is a new concept for us, but with Roanza’s help it has slotted into our operation seamlessly.”

A 3235L ENA model, Eurovia Contracting’s truck is powered by a 7.7-litre six-cylinder engine which produces 260 kW (354 hp), and drives through a 12-speed version of the fuel-efficient Mercedes PowerShift 3 automated manual transmission.

Its ENA configuration – single front steer axle, double-drive bogie and rear-steer axle – gives the Econic an impressively tight turning circle. The resulting, enhanced manoeuvrability compared to a standard 8×4 vehicle is a major advantage for operation on the capital’s busy streets, and at other locations where access is tight.

The truck is fitted with a Thompsons steel tipping body and, immediately behind the cab, a Palfinger Epsilon crane, which has a maximum capacity of 3,700 kg and can reach up to 8.2 metres. As with all new Econics supplied through the manufacturer’s UK Dealer network, it is covered by a three-year/160,000 km warranty.

He added: “While safety topped our list of priorities when we chose this truck, reliability and aftersales back-up were also of crucial importance. We’ve been operating Mercedes-Benz trucks for many years, and our fleet includes 20 Econic vacuum tankers that were also supplied by Roanza Truck & Van, and are on gully-emptying duties around the UK. Much like the vehicles themselves, the support we receive from Roanza and its partners in the Mercedes-Benz Dealer network has always been absolutely dependable.”