Welcome to the Mercedes Truckpages Hub. Here you will find all the used Mercedes trucks for sale – all in the UK.

Mercedes trucks are a division of the Daimler Trucks business.  For many years, this group has been the largest truck manufacturer in the world.  With the majority of the trucks made in one factory in Worth, Germany, Mercedes-Benz have a modern-looking range of commercial vehicles that cross into all segments. From the smallest Citan city van to the largest Arocs heavy haulage tractor unit, Mercedes will have a variant that suits just about every application.

The trucks benefit from being part of a group that makes luxury passenger cars – this means that interiors, entertainment technology and safety technology can all be transferred within the group.

Most popular of the Mercedes trucks for sale here are the top-weight Actros and the Sprinter panel vans, whilst the Atego may be a little on the heavy side for UK 7.5 tonne operation.  And who wouldn’t want to own a Unimog?

As far as Mercedes-Benz is concerned – their history is anything but brief.  Widely acknowledged as the creator of internal combustion driven transport, Benz effectively inventoried the truck as we know it back in 1886 in Mannheim, Germany.

It wasn’t until 1926, however that Mercedes-Benz launched a range of trucks with the first diesel engine arriving a year later.

Mercedes were very busy building trucks for the domestic and home markets – but the first familiar-looking truck was the 1960s LP cab-over versions.  From 1963 Mercedes-Benz adopted a similar naming protocol that is in use today – the first two number are the GVW in tonnes and the next two are the engine power in HP (Divided by ten) so a 1513 is a 15 tonne GVW truck with a 130HP engine.

Today perhaps 1974 is not that modern, but we still see trucks of the 1974 NG or ‘New Generation’  design on the roads – especially overseas.  This truck range ran until 1988 albeit in three ‘generations’ in total.  There was the NG 73, NG 80 in 1980 and the NG85 in 1985 which also saw the EPS Powershift gearbox introduced for the first time. The NG 85 could be recognized by its smaller, square model badges with silver lettering. The dash board received more modern-looking rocker switches instead of the previous push buttons.

1989 saw the introduction of the SK ‘heavy class’ trucks that lasted until 1998 when the Actros came along.  It did look a lot like the predecessor, although it was loaded with plenty more technical aids and was a nicer truck to drive.

It was not until the 2000’s that Mercedes really started to move in terms of the range of the trucks available.

Launched as far back as 1998, the Atego is Mercedes’ smallest truck operating at 6 to 16 tonnes GVW.  As you would expect they are well engineered and well built, but at 7.5 tonnes GVW they may be still a little on the heavy side for UK operation.  An excellent choice at 10 tonnes GVW and above, these are often used for trucks with expensive conversions as operators want them to last.  The Atego had a redesign in 2004 with new interiors and a revised face.  There was a facelift in 2010 and the launch of a totally new version at Euro 6 in 2013/4 to match the new, modern look trucks across the range.

Launched in 2001 and discontinued in 2013 when the Antos was launched, there are still plenty of Axor examples for sale in the UK. The smaller and more basic cab compared to the Actros, but available in rigid and tractor unit configuration.  As a prime mover, the Axor is best suited for local distribution – looking to travel longer distances, then the Actros has to be on the shopping list instead.  There was a facelift in 2005, but otherwise the configuration remained largely the same throughout its life

The early versions of the Actros were not terribly popular in the UK.  Mercedes-Benz put a great deal of time and effort into improving the Actros with the ‘Version 2’ launched in 2002 with the third version arriving five years later. It was as early as 2011 that saw the reveal of the ‘New Actros’ designed for Euro 6 use. This truck was a game changer aesthetically and has proved a great success for Mercedes-Benz.  The latest facelift for the Actros was revealed in 2018 for the 2019 model year with plenty of additional tech and touchscreens in the cab.

Targeted at the construction industry, the Arocs is fundamentally a beefed up Actros with a revised brand.  Most commonly seen in rigid form as a tipper or mixer, suited to off-road work, the Arocs is also available as a tractor unit – ideal for building sites collecting plant machinery with a low-loader semi trailer.

The truck was designed for Euro 6 – you will never find any older variants for sale – it is viewed highly in the construction world – helped no doubt by the three pointed star on the front.

The baby brother of the Actros, the Antos cab essentially replaced the Axor as the smaller, lighter weight cab for the local distribution market in 2013.  However, the life of the Antos has been short-lived as it was replaced by the New Actros 2019 model at 18 to 40 tonnes GVW.

Mercedes’ rubbish truck.  That doesn’t mean it is no good, it means that it is often used for refuse collection, thanks to the low entry cab and excellent visibility.  We are increasingly seeing these trucks used for other urban distribution applications, such as scaffold trucks, as pedestrian safety comes ever-higher up the agenda.  Launched back in 1998, the Econic is available as an 18 or 26-tonner – more recently an 8×4 Econic has been launched to help reach new markets for this truck.

This is a great piece of kit.  Nothing can stop it, it is unbreakable and hugely flexible.  The only downside is the price. You have to really need a Unimog to warrant paying the price.  But if you need one, you have to have one.  This 4×4 can go anywhere and the cockpit of the modern machines looks more like that in a fighter jet than a truck.  We all want one. 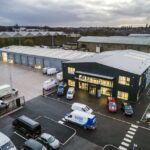 Mercedes Truck & Van dealer, Midlands Truck & Van has been showing off their all-new £7 million dealership site in Smethwick, West Midlands. Midland Truck & Van's Smethwick Reception & Offices It looks impressive – and so it should.  The site is the first to follow a new design concept taken from the Mercedes passenger car division. Visitors to the site are greeted by dedicated hosts, then introduced to other members of the team. A far cry from the traditional truck and van outlet, the site welcomed its first customers in December. Managing Director Steve Hunt declared: “This project has… 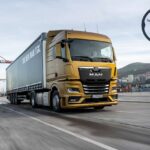 Germany has introduced a generous scrappage scheme aimed at helping both the German truck operators and the German truck manufacturers alike. A Euro 6 MAN TGX - Compared with its predecessor, consumption and CO2 emissions - have been reduced by up to 8.2 percent The government is focusing more strongly on the environmental & safety benefits that the scrappage scheme can bring – we all know that a Euro 6 truck produces 80% less NOx than a Euro 5 model. We all know that the most modern trucks are the safest with the new active and passive safety systems on… 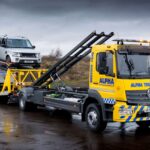 We love to see a tenacious sales executive work to get a deal.  That’s what happened with Bell Truck & Van’s Truck Sales Executive Alex Wordsworth in closing a deal for an Atego 1530 recovery truck for Alpha Recovery. Roger Dyson’s SLA transporter bed is designed to slide clear of the chassis and lie very close to the ground, giving an approach angle of less than five degrees Alpha Recovery has operated Mercedes-Benz trucks of various size in the past, but more recently most of the vehicles had been Swedish-built. “The Dealer has made great strides over the past couple… 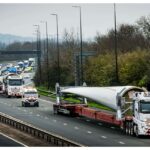 We are all accustomed to seeing the large power generating turbines dotted around the UK – a sight that is set to become more familiar over the coming years.  A rarer sight is seeing one of the turbine blades heading down the motorway, let alone a convoy of three of them. Heavy haulage specialist Plant Speed deployed its trio of 250-tonne Mercedes-Benz SLT tractor units to transport what are believed to be the longest wind turbine blades ever moved by road in this country. Heavy haulage specialist Plant Speed used its newest truck – a 250-tonne Actros 4463 SLT to… 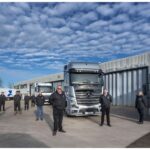 As a replacement service point for the Marshall Truck & Van Poole workshop, ETS Truck & Van have taken over the reigns for the area from their Blandford Forum location. It has been more than 25 years since Colin Gale last worked for a member of the Mercedes-Benz commercial vehicle network Now he has re-established his association with the manufacturer but it’s the name of his own business that’s above the workshop doors. : ETS Truck & Van Managing Director Colin Gale and Operations Director Darren Gale, second from right, are pictured with colleagues, from left, Dave Corson, Jordan Young,…