You will find a great choice of used Volvo Trucks for sale on these pages.

Volvo Trucks are seen as a premium truck brand in the UK, they are famed for their heavy trucks – especially for their desirable FH range. For most drivers, if it’s not a Scania then it must be a Volvo – especially an FH16 Globetrotter XL!

There is a full range of heavy Volvo trucks for sale here from 18 tonnes upwards.

Way back in the past, the company did experiment with a middleweight 7.5 tonner, but today focuses on what it does best – heavy trucks.

Volvo Group are the owners of Renault Trucks, which reaches the markets the premium Volvo brand cannot reach – including lighter weight trucks.

At Truckpages, we always advertise a great choice of the whole range of used Volvo trucks for sale.  From a Volvo FMX tipper for the construction industry to a range-topping FH16.750 tractor unit – until Volvo brings out a more powerful one that is. 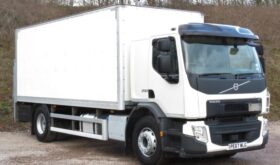 Thomastown Trucks specialises in the sales of quality used tractor units, tippers, trailers, refrigerated trailers and plant. With our highly trained sales staff we provide the complete service. We are situated half way between Dublin and Belfast right on the border, off the N1 (A1) motorway at...
12