Finding MAN trucks for sale is easy at Truckpages. All of the trucks on these pages come from the German manufacturer.

MAN Trucks come from a company with a long engineering tradition.  Now, alongside Scania, MAN Truck & Bus is under the ownership of the Traton Group, the heavy truck arm of Volkswagen.

The company builds trucks from 7.5 tonnes GVW right up to heavy haulage versions plus a great deal of military trucks (for the UK as well). More recently, MAN has rebranded the VW Crafter van to become the MAN TGE van, available from 3.5 tonnes, completing their range.

The most common type of MAN trucks for sale in the UK are tractor units, with many kitted out suited to ADR pet regs.  This expertise was inherited in the UK from MAN’s takeover of ERF who had a strong position in this market. 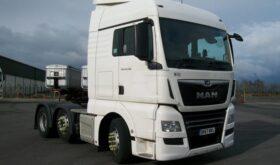 View All Stock - J and B Limited

THE MAJORITY OF OUR VEHICLES ARE END OF LEASE/EX-CONTRACT FULLY MAINTAINED AND COME WITH LOTS OF HISTORY. - SOLD WITH FULL SERVICE AND INSPECTION, NEW MOT IF REQUIRED. - WE WELOME PX. GREAT RATES ON RENT AND LEASE DEALS. - ALL MAJOR CREDIT DEBIT CARDS TAKED. - FREE BRISTOL AIR PORT OR SWINDON TRAIN...
10