As runaway UK market leader you would expect there to be tonnes of used DAF trucks for sale at Truckpages – and you’d be right.

With over 30% of the new truck market for over a decade, DAF trucks have become a firm favourite with UK truck operators. No manufacturer gets to this level of dominance without a good product plus great dealer backup and support.

You can find a DAF truck for every duty cycle as they cover the whole range from a 7.5 tonne LF to a heavy haulage XF tractor unit at 150 tonnes.

Perhaps what appeals most to truck operators is that all the right hand drive DAF trucks are assembled in the UK in Leyland, Lancashire.

Why Buy a DAF Truck?

The most important part of the mix is the truck itself.  DAF spend their R&D money wisely – they have not thrown money away on developing brand new cabs – they are essentially just square boxes.  The XF cab, for example originates back in 1987!

What they do is work on realistic improvements to their driveline and aerodynamics.  They are rarely first to market with a brand-new invention, but when they bring new technology on board, operators can be confident that it will work.

DAF is owned by American Fortune 200 corporation, PACCAR.  They sell plenty of trucks under their other brands worldwide as well, including Kenworth and Peterbilt.

This is a company that has NEVER made a loss in 80 year trading history and has brought DAF back from near extinction in the late 1990’s to become a European truck manufacturing powerhouse.

DAF is a Dutch company, founded back in 1928 and has made buses, cars and trucks over the years.  There were plenty of ups and downs, but after the low point of bankruptcy in 1996 after a failed run with the UK’s Leyland (remember Leyland DAF trucks?).

Since this time, the business has thrived with a straightforward range of three cabs, but thousands of variants – lengths, weights, axle configurations and driveline choices.

Even during the 2020 Covid pandemic the company managed to increase market share in the UK.

DAF’s lightweight truck from 7.5 tonnes to 18 tonnes GVW.  The smaller models can be driven on a car licence (if the driver is old enough to have Granddad’s rights…) The LF shares a cab with the Renault Midlum/ Range D – in fact, the DAF LF cab is made in the Renault factory in France.  Assembly takes place in Leyland in the UK for our right hand drive models.

In addition to the LF45 there was the LF55 which used the same cab, but the larger engine and went from over 12 tonnes to 18 tonnes GVW. Read more about the LF and its variants on the DAF LF Pages.

The mid-range cab which is used mainly for local distribution but can also be configured as a sleeper cabbed tractor unit with a high roof for distance haulage.  The CF is a favourite with tipper operators thanks to the reliability and payloads that are available when configured as an eight wheeler.

Prior to the introduction of the Euro 6 range in 2014, the CF had additional numbers in the model (an easy way to tell if the truck you are looking at meets the Euro 6 standard). Prior to 2014 you would be buying a CF65.220 instead of a CF220.  There were also CF75 and CF85 variants.  These extra numbers originally determined the engine sizes, but with the simplification of the ranges of engines, this has no longer become necessary.

The largest truck cab in the DAF range – usually seen on UK roads in tractor unit guise, the XF cab originally started out in the DAF 95 back in the 1990’s – although you would never realise it from the modern look of today’s 44-tonne tractor units.

The XF now has a choice of Space cab and Super Space cab (high roof sleeper version). You can read more about these models on our dedicated DAF XF pages. 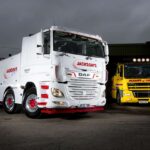 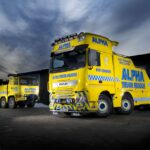 It’s some shopping list that gets the price of your new truck up to 340,000. That’s what commercial vehicle recovery specialist, Alpha Recovery in Northumberland has invested in their new wrecker – a 150-tonne GTW DAF XF eight-wheeler with Super Space Cab and recovery equipment from Boniface Engineering. The new XF joins an existing 69-plate DAF XF 530 and a 21-year-old ex-military 8x6 Leyland DROPS That’s not all on their list, however. An order for a further identical truck, through local DAF Dealer, Evans Halshaw in Stockton-on-Tees, is expected shortly. Value for Money Alpha Recovery says its latest investment represents… 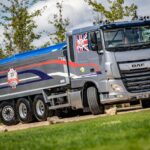 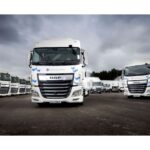 If a company’s sole business is to supply support services, you would expect it to know a thing or two about providing support.  So it is high praise indeed when specialist support-vehicle provider to the TV and film industry, Facilities by ADF, praises their local DAF dealer to such an extent that they have decided to only buy DAF trucks in the future. The company is expanding its exclusively DAF fleet with an additional 25 trucks to deliver on-location support for shows including The Crown, War of the Worlds, Peaky Blinders and the Marvel film franchise. The DAF Trucks come… 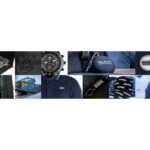 For drivers not content with simply spending all day inside a DAF truck, they can now splash out on a whole series of clothes, toys and gadgets to remind them of the day job 24/7! Yes, DAF have released the details of their new collection of merchandise in a fully new online store. Not restricted to a couple of baseball caps and T-Shirts, the UK market leader has gone overboard with men, women and kids sections and includes items for both casual and business activities. Our favourite amongst the collection has to be a boxed set of DAF socks.  What…