Thinking of buying a used Iveco truck? There are always tonnes of Used Iveco Trucks for sale on the Truckpages website.

Not sure about the company? Then read on…

So, whilst Iveco itself does not have such a long history as many other European truck manufacturers, each of the founding companies have histories reaching back into the nineteenth century.

Now part of the CNH (Case New Holland) group with UK headquarters in Basildon, Iveco remains primarily an Italian manufacturer of trucks and vans.  Iveco’s main models are – in order of size – the Stralis, Trakker, Eurocargo and Daily vans.

The company’s reputation in the UK has not been the strongest, with early issues that caused the brand some problems, but certainly since 2000, their trucks and vans have been able to compete head on with the rest of the manufacturers.  You should find plenty of quality used Iveco trucks for sale at Truckpages. 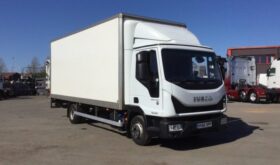