An extremely popular truck in the UK, you will always find a great selection of used Iveco Eurocargo trucks for sale here at Truckpages. Iveco’s middleweight truck sits between their Daily and Stralis (now S-Way) models with the range covering rigid trucks from 7.5 to 18 tonnes gross vehicle weight (GVW). The key to the model is its flexibility, you will find this workhorse configured for local urban deliveries, as a tipper in construction spec, a dedicated municipal spec for sweepers – you can even buy a 4×4 version or one that runs on CNG!

The truck has a great heritage – starting off life in the UK as the UK-built Ford Cargo (for those of us with long memories) changing to the Eurocargo brand in 1991 and seeing production move to Italy in 1996. Many call the model the ‘Cursor’ as this is what is written on the cab of some older models.  The Cursor is, in fact, the name of the engine fitted to the trucks. The truck is still often seen as a ‘British Truck’ even though it hasn’t been built here for around thirty years, (the Ford Transit also shares this misconception).  The most British truck you can buy in the UK today at this weight range is the DAF LF that is assembled at Leyland – even though DAF is Netherlands-based, and US owned (PACCAR)!

Browse through the types of bodies fitted to the Euro cargo in the section under the search box on the right hand side of the page and you will see the popularity and flexibility of the range.  Almost every conceivable type of conversion has been carried out on it. You would expect plenty of box vans and curtainsiders, but there are also impressive numbers of road sweepers , cranes, cherry pickers and other specialist types. 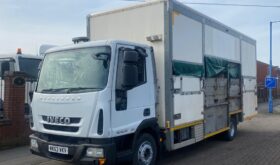 View All Iveco Trucks For Sale