Welcome to the Scania hub where you will find hundreds of Scania trucks for sale.

Viewed by many as the premium truck brand, Scania is the darling of owner drivers worldwide.  This aspiration stems from the company’s famous V8 Topline tractor units, but still strikes home for the canny tipper operator running 8×4 P Series tippers.

Scania is currently selling plenty of new trucks – they currently have the second largest share of the truck market in the UK – a position that had been held by Mercedes-Benz for many years.

You will find used Scania trucks for sale of all shapes and sizes at Truckpages – browse the most recent on this page or carry out a more detailed search.

From the early 2 series trucks – now collectors’ items, to the 3-series, 4-series and the newer model lines from the P Series, G Series, R Series and the recently launched S Series Scanias.

Looking for all V8 Scania trucks for sale? 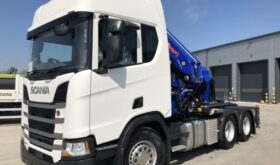