The Scania R-Series has been the dream truck for many driver and owner driver since its launch back in 2004.  The Swedish manufacturer is thought of as the ‘Porsche’ brand of the truck world – interesting since it is now under the same ownership, (VW).

One reason for the success of the model range is the rock-solid residual values that it enjoys.  Buy a late, low mileage example and it will still be worth something after running it for three years.  Another reason is Scania’s famous V8 engine fitted in the R-Series. The 16-litre V8 has been at the top of every truck buyer’s shopping list since its launch over 50 years ago– especially with a Topline cab.

Scania have launched a new flagship truck in 2016 called the S-Series which has relegated the R-Series into second place.

At the foot of this page we give an overview of the timeline – when the facelifts took place and which model years enjoyed technological upgrades.

More searches are carried out on Truckpages for used Scania R-Series trucks than any other model.  This could be down to truck buyers checking if they can afford an R580 – when they find out that they can’t then they may head off to the DAF pages for something more affordable to buy. 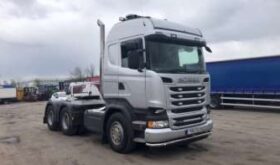