A rare beast in the UK used truck market, we are starting to see examples of Scania’s latest flagship the S Series for sale in the UK’s used market from 2021 but larger numbers won’t be seen until 2023 or later.

This new cab supersedes the R Series (which still continues production) as the top cab in the Scania range and obviously the one that all the drivers are yearning for.

The cab is a flat floor design and comes in two heights – ‘Normal’ and ‘Highline’ which gives the upper bunk an additional 10-20 centimetres space – and, of course, extra standing height for the driver inside the cab.

Ergonomic alterations around the positioning of the dashboard, the seats and the steering wheels means that the driver has a better view of the road than in the R-Series equivalent.

The S Series has a choice of 8-speed range-change gearbox, 12-speed range-splitter gearbox or the Opticruise G33M gearbox (for higher output engines from 500hp). For fans of driving backwards, the Opticruise gearbox effectively has 8 reverse speeds.

If you fancy an S-Series, but don’t have the budget, think about checking out the older Scania R-Series trucks. 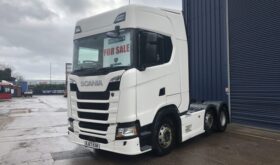