As the lightest range of Scania trucks available, there are always plenty of used P Series Scanias for sale at Truckpages.

Launched as a replacement to the outgoing 4-series as far back as 2004, the P Series launching just a few months after the R Series.  At this time there was no G Series which sits between the P Series and the R Series – the G Series was revealed three years later in 2007.

Keep an eye out for post 2011 models – this was the changeover year to a new, facelifted version. Check also the move to Euro 6 – you should be safe with a 2014 model, but remember to always check the emission standards for trucks of this period as they could well be Euro 5.

2018 saw the ‘second generation’ of the P Series launched which are now on the UK’s roads and we will be seeing increasing numbers of used models arrive into the market.  With this second generation came the new L Series – a low entry cab for urban use based on the P cab.

The most common conversion for the P-Series available in the UK second hand truck market is as an 8×4 tipper.  The sweet spot here seems to be the 370hp P370 variant, whilst the P230 is the most common variant across all body types. 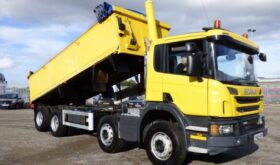 Winter draws on. Gritters and spreaders are coming out of hibernation as new metal join the fleet around the country ready to battle with what the UK weather brings. The whole country complains that as soon as a drop of snow falls we come to a standstill but consider how it would be if the councils and their contractors did nothing about the problems of clearing the snow away. Martin Mitchell, Plant Procurement Lead for Sir Robert McAlpineReady for work on the M74 - Scania Gritters Reliability is Key Sir Robert McAlpine is already busy with preparations as the company… 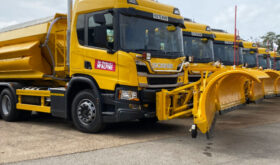 Scania has embarked on its electric journey with the trucks most used for local distribution and municipal roles – the P – Series and low entry cabbed L-Series. The company says that it will roll out new models every year from now on until the range is complete – including long distance haulage. For the operators that are keen to go green, but not yet ready financially or operationally to take the fully electric plunge, Scania are also offering a plug-in hybrid version. Refuelling the P Series Scania Electric sing a CCS connector Scania’s Fully Electric (BEV) Trucks So with… 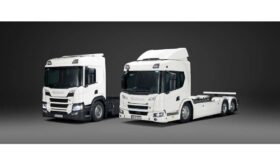 Matthew James Global Relocations, a removal company working across London and worldwide has taken the plunge and invested in their first hybrid truck – a 6x2 Scania P320 with a specialist 27ft removal body from SBR Specialist Coachbuilders of Preston. Silent Running The hybrid is perfect for quiet operation in and around London – assuming the truck is running with 15 tonnes onboard then should manage up to 10 kilometres on electric power only. That assumes plenty of additional factors –… 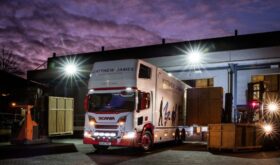 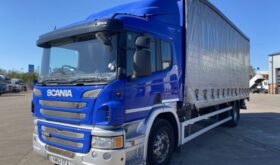 The P230 was Scania's lowest powered truck in the P Series range.  Available from the launch in 2005 until the replacement at Euro 6 by the P250.

Great 18 tonner for local work if you are not looking for a high-powered version for distance or tipper operation, the 230hp variant has plenty of power to complete the job.
Used Scania P230 Trucks
As a premium brand, there are always Scanias available - either for the domestic market or to put on the boat overseas to the export market.  The...

Used Scania P320 Trucks
The Scania P320 is a high powered rigid for operation as a 6x2 at 26 tonnes GVW. Typical applications for the 320hp trucks are local, high payload operations - often with day cabs to boost payload.

The P320 is well suited for refuse truck work as well as a crane truck - especially in XT 'construction' guise.

As with all P Series, there is a choice of 'Short', 'day low' and 'day normal' cabs. There is also a choice of low, normal and Highline sleeper cabs -although...