The DAF LF range of trucks is the smallest truck made by DAF.  Available in the UK from 7.5 tonnes to 12 tonnes GVW.  Operators love to buy these trucks as they are reliable, there are plenty of them (DAF have been UK market leaders for well over a decade) and the dealer support is excellent nationwide.

There is always a great selection of used DAF LF 7.5 tonners for sale here at Truckpages – it is the Ford Focus of the truck world no one aspires to have one, but they are pleased when they do.  The LF makes a great box van or curtainsider for local distribution and is flexible enough to work as a 7.5 tonne tipper – a typical builder’s merchant truck.

For operators needing a larger payloads from a DAF truck, they should consider the next size up, the DAF CF. 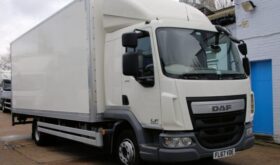