The new shape Euro 6 DAF CF is the middleweight truck in DAF’s three-strong truck range.  The CF has gross vehicle weights starting at 18 tonnes and going right up to 32 tonnes for the eight wheel operation and 44 tonnes as a 6×2 tractor unit.

On these pages you will find details of the new shape CF trucks launched in the UK for 2014 onwards.  Buyers of older models should be looking at the older naming convention – there were CF 65, CF75 and CF85 trucks prior to 2014 – all of which running at Euro 5 or below.

Since 2007, truck operators can buy ready-bodied DAF CF trucks from the factory, so keep an eye out for one of these in the used truck market.  You won’t find tippers, but you still see 4×2 box and curtainsiders.

A solid choice – no transport manager ever got the sack for buying a DAF CF! 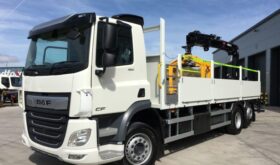