The MAN TGA is the last of the earlier series of heavy trucks from MAN.  There are still plenty of used examples in the UK.  The TGA is particularly favoured here in the UK as it also formed the basis of the last ERF truck to be made (MAN Bought ERF some years earlier).

Serious UK truck buyers should consider the newer models from MAN – especially the TGX or TGS which were the replacements for the TGA. 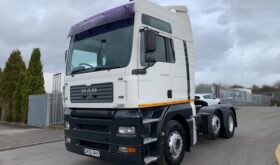