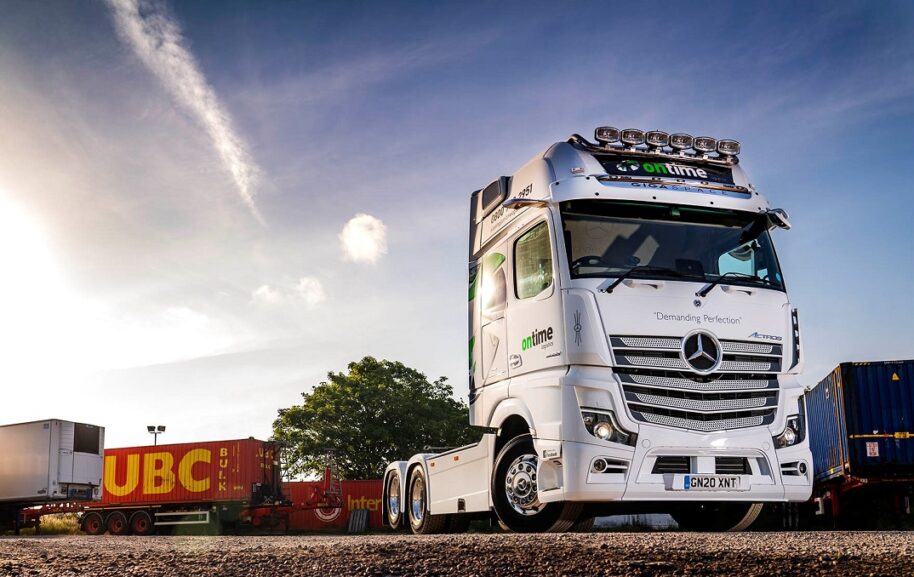 A new flagship truck has arrived at family-owned Kent-based Ontime Logistics.  The company has gone for an impressive looking Actros 2663 GigaSpace with a lengthy list of options including colour-coded bumpers, high-performance bi-xenon headlamps, a Jost sliding fifth wheel, Alcoa alloy wheels, and a back-lit star in the grille.

The truck’s sideskirts and chassis infill are the work of SB Components, of Wisbech, which also fitted a second fuel tank with 350-litre capacity – Actros tractors specified for maximum manoeuvrability, with a lifting back axle behind the driven middle axle, come as standard with a 290-litre tank.

Driver John Mataringa, meanwhile, benefits from an air-suspended cab with ExtraLine equipment package, and a PremiumComfort multizone mattress. His Multimedia Cockpit, interactive is the upgraded version of Mercedes-Benz Trucks’ stylish and intuitive new dashboard, which replaces traditional switchgear with twin screens, one with ‘touch’ functionality. It features a larger, 12in instrument panel and extra functionality, including navigation with Traffic Sign Assist.

The Actros has proved to be fuel-efficient and popular with our drivers – we like to make the guys as comfortable and safe as possible, so send them out in high-end equipment with fridges, microwaves and lots of other extras. They’re big fans of the Mercedes-Benz, which is beautifully built and lovely to drive. They seem always to get a good night’s sleep as well.

The new unit is now working alongside the first two Mercedes-Benz trucks to be purchased by family-owned Ontime Logistics. Both entered service last autumn, and are also Actros tractors with GigaSpace cabs. However, as 2553 variants they employ 12.8-litre ‘straight-sixes’ producing 390 kW (530 hp).

Although these are the first Mercedes-Benz trucks Ontime Logistics has bought outright, the company runs a number of units from the previous Actros model generation, which are the subject of lease agreements with Sparshatt’s rental division. The most recent of these, a pair of 2553s with GigaSpace cabs, entered service a year ago. From a ‘standing start’ in 2017, roughly half of the operator’s 30 6×2 tractor units now wear three-pointed stars.

Ontime Logistics specialises in transporting shipping containers on fixed and extendable skeletal trailers, and in chilled and ambient distribution services. Established by proprietor Wayne Baber in 2007, it has headquarters on the Isle of Grain peninsula and works from all main UK ports, delivering for an impressive portfolio of ‘blue chip’ clients to regional distribution centres, warehouses and retail stores nationwide.

Explaining the thinking behind its latest truck, Mr Baber said: “I wanted something a bit special this time, and the most powerful Actros with the biggest cab, a rear-lift axle and all the ‘whistles and bells’ fitted the bill nicely. It’s everything I’d hoped for, and more, a fantastic looking truck with some amazing technology. We all love it.”

If the trucks themselves have lived up to Ontime Logistics’ hopes and expectations, so, too, has the Dealer. Sparshatt’s customer-focused back-up has been another key factor in persuading the operator to take on so many Mercedes-Benz trucks over the last three years.

“We’ve developed a really good relationship with Sparshatt’s (co-owner) Paul Rooney and his team,” enthused Mr Baber. “They’re friendly, helpful and very flexible. When you get that level of support from an important supplier you really want to build on it, which is what we’ve done.”