Home > From Zero to Solus Mercedes-Benz fleet inside Three Years

From Zero to Solus Mercedes-Benz fleet inside Three Years 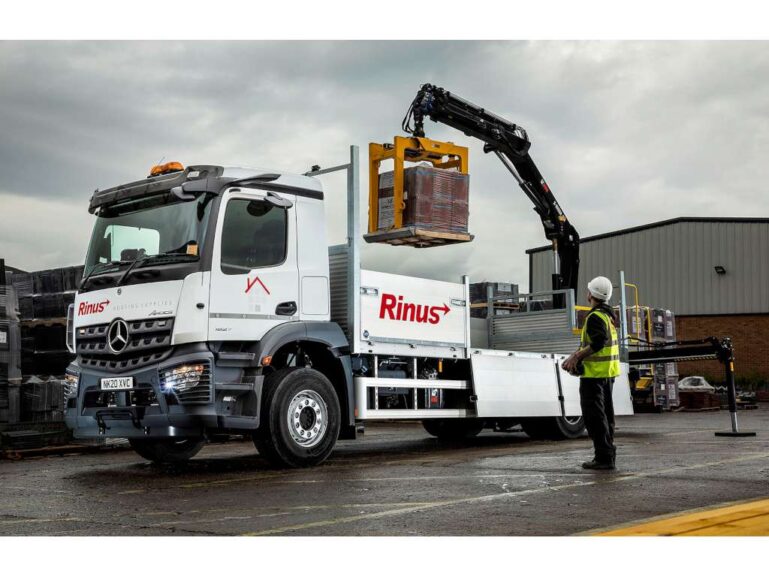 Rinus Roofing Supplies’ Operations Manager, Martin Pollard must be impressed with Mercedes-Benz trucks.  Back in 2013 there were no trucks wearing the three pointed star on their fleet of 50 or so trucks.  Just seven years later, the fleet is exclusively Mercedes.

This is testament not only to the quality and reliability of the trucks, but also the dealer’s sales, parts and service operations.

A Pair of Arocs

Like all the earlier Mercedes trucks, the most recent pair of Arocs were supplied by Bell Truck and Van. Both are rigids with ClassicSpace M-cabs, JC Payne dropside bodies, and rear-mounted Hiab cranes. Their specifications include MirrorCam, the camera-based replacement for conventional mirrors, and the Active Brake Assist 5 emergency braking system.

One, a 26-tonne 2532 L model with rear-steer axle for enhanced manoeuvrability, is now working from the branch in Leeds that Rinus Roofing Supplies opened in June. The other, an 18-tonne 1827 L, is based at its depot in Bradford.

From Zero to Solus

The company acquired its first Mercedes-Benz vehicles, also from Bell Truck and Van, in 2013. Today, having stood down the last of its previous trucks in October 2019, and with the exceptions of four rented vehicles which also wear three-pointed stars, every one of its 50 trucks arrived via the same North-East Dealer.

Most, including the latest, are the subject of competitively priced Mercedes-Benz Finance contract hire agreements under which they are maintained by the most conveniently located members of the manufacturer’s Dealer network.

The line-up includes a pair of 3.5-tonne Sprinters and a handful of 7.5-tonners, both Mercedes-Benz Atego and FUSO Canter models, as well as five 18-tonne and a single 32-tonne Arocs. The backbone of the fleet, however, is the 26-tonne Arocs, and Bell Truck and Van is due to deliver another three before the end of the year. Like all of the bigger rigids, these will also have dropside bodies and cranes.

Rinus Roofing Supplies operates from a head office in Darwen, Lancashire, and a network of 24 other locations which it continues to expand.

Rinus Roofing Supplies relies on its Mercedes-Benz and FUSO trucks to make timely, efficient deliveries of a huge range of roofing supplies, including everything from concrete, clay, fibre cement and slate tiles, to roof lights and insulation, guttering, coverings, ventilation, sheet materials and felt.

Its Operations & Risk Manager Martin Pollard recalled: “It was apparent from quite early on that our first Mercedes-Benz vehicles were built to a higher standard than those we’d been using, and spent more time out on the road and earning, rather than in the workshop.

“The improvement has become more obvious as time has progressed – after five years repair costs for our previous trucks were a lot higher than we’ve experienced with the Arocs. This increased reliability has been invaluable in enabling us to meet our delivery commitments to customers, as the business has continued to grow.”

He continued: “Even more important, though, is Mercedes-Benz Trucks’ well-established leadership in the field of safety. The protection of operatives, and, indeed, of other road users, is the key driver behind the design of our vehicles, and in this respect the latest Arocs takes us another exciting step forward.”

Mr Pollard saw MirrorCam in operation for the first time during a presentation hosted by Bell Truck and Van and held at Mercedes-Benz Trucks’ Customer Experience Centre at Wentworth Park, near Barnsley.

Mr Pollard was struck by the way the slim, roof-mounted camera housings effectively eliminate the blind spots caused by conventional mirrors. “The visibility is so much better, and it’s particularly noticeable, for example, when you’re approaching a roundabout,” he said. “Drivers no longer have to contend with mirror covers the size of dustbin lids blocking their line of sight. MirrorCam’s cameras also make it a lot easier to judge where the truck’s rear-end is.”

We’ve developed an excellent working relationship with Bell Truck and Van. Its Truck Sales Executive Craig Graham liaises behind the scenes with the bodybuilder and crane supplier to provide us with a seamless service, and when the vehicles are delivered to site the Dealer provides an excellent handover service, with comprehensive instruction for our drivers on using the new equipment.