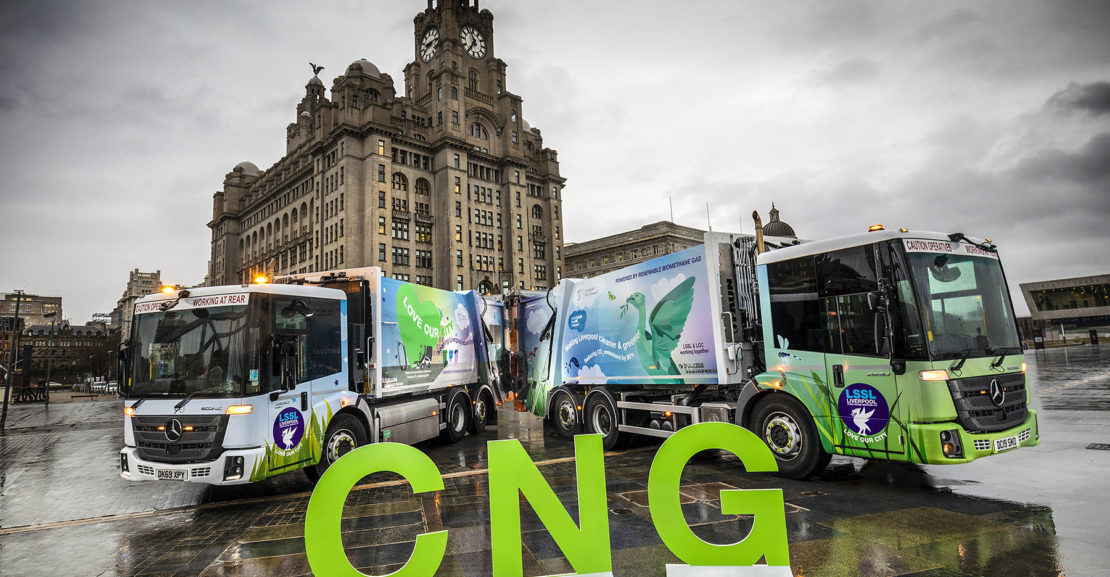 If there’s one type of business that should be using gas-powered trucks, it’s the waste business.  Methane was an unwanted byproduct of running a landfill site.  As a gas it is worse for the environment than releasing carbon dioxide.  This is why it used to be flared off at source.

Imagine capturing this waste resource and using it to power a truck.

That’s what the city of Liverpool have done in buying 20 Mercedes Econic Natural Gas Trucks (NGT) refuse trucks.  These trucks will happily run on Biogas – reclaimed from waste feedstocks.

The trucks look and drive like any other Mercedes truck.  They have a 302hp engine and six-speed Allison automatic transmissions.  Between them the vehicles will cover more than 150,000 miles per year, mostly in Liverpool city centre. The council calculates they will produce 80% less carbon and 90% less nitrogen oxide compared to diesel-engined refuse trucks, while also cutting fuel costs by 35%.

Unlike many local council waste operations, Liverpool’s is not contracted out – Liverpool Streetscene Services Ltd (LSSL), is a result of the city council bringing their cleansing and refuse operations back under its control in 2016.  This means that they can take a longer-term view on investment and the environment when deciding on the specific refuse trucks to operate.

These gas-powered trucks are much cleaner, and also quieter, than traditional refuse collection vehicles, so we’re confident they’ll make a real difference to the local environment. At the same time, they benefit from the very high levels of reliability, safety and user-friendly design that our older diesel-engined Econics have been delivering for years.

The vehicles were selected through a competitive tender but once we’d made the choice, the team at Roanza Truck & Van worked very closely with us throughout the ordering and delivery process. Sales Director Neil Parkinson, Truck Sales Executive Richie Rainford and their colleagues put in a lot of hours to help us get the specification right.

The 6×2 trucks are fitted with Faun Zoeller Variopress compactor bodies with offer 10.0-tonne payload capacities. Their rear steering axles enhance manoeuvrability, making it easier for drivers to get in and out of tight city-centre locations.

Mayor of Liverpool Joe Anderson said: “Our investment in this new fleet of refuse vehicles is a great statement of intent in our goal to make Liverpool a cleaner and greener city. These safe and efficient vehicles give collection teams the right tools to ensure residents receive a reliable service.

“However, we still need residents to take action by reducing, reusing and recycling their waste, if we are to hit our target of recycling more than 55% of the waste we collect.’’

To drive home this message the Econics wear a vinyl-wrap livery which was designed in-house by the council’s marketing team, to promote the vehicles’ environmentally friendly credentials and carry messages about services.

The launch of the eco-friendly refuse fleet follows the recent announcement that Liverpool City Council is set to meet its climate change targets – three years ahead of schedule.