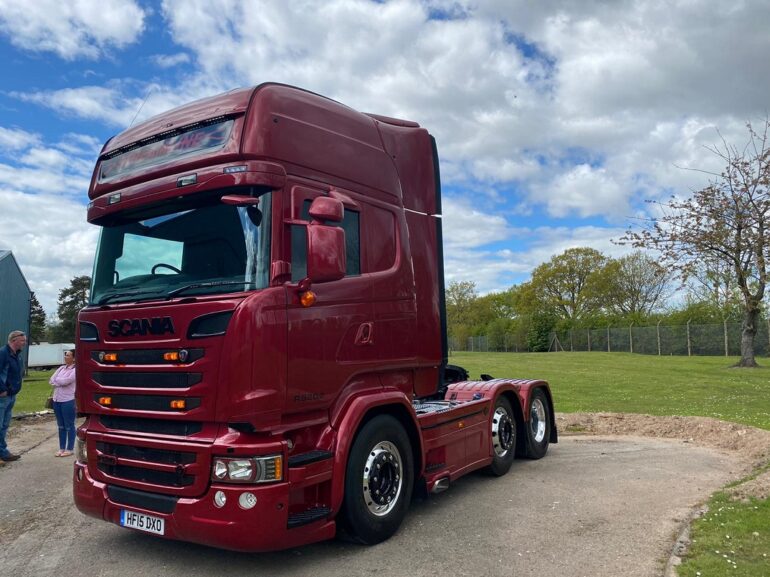 Every driver wants to be the owner driver of a Scania V8. Read what one ex-potato truck driver did to get his prize – a bright red, used Scania R520 at Truckpages.

There can be very few truck drivers on the road who don’t sometimes daydream about taking the plunge and taking the owner-driver route. Sitting at the wheel of their own truck.

That truck in that dream would usually be a Scania R Series.

After nearly 27 years working as a driver in the UK, that’s just what Simon McMahon did.  He went for the dream and bought himself a bright red, used Scania R 520.

From Spuds to Scania V8s

Since finishing school at the age of 15, McMahon has worked for a major potato grower, operating farm tractors, trucks and farm machinery, including large potato harvesters. Upon resigning from the company to start his own haulage business, he agreed with his previous employer that he would continue operating the harvester during the eight-week period when the crop is harvested. In return, they would award him transport assignments.

“During that time my son Tyler, who is now taking his tractor-trailer driving license, can drive the truck. He is now 19 going on 20. He’s been with me in the truck since he was old enough to climb the steps.”

A Scania V8 for heavy loads

Having driven heavy potato loads for many years, McMahon promised himself that he wouldn’t be underpowered in his first truck. He therefore had his sights on a V8 and the ruby red Scania R 520 was a perfect fit. “Red was my dad’s favourite colour and it’s a tribute to him.”

The used truck that will now be his business is a 2015 model with 500,000 km on the clock. “It was in very good condition, nearly pristine in the cab.”

I learned driving trucks in a Scania. I’ve driven several brands over the years but I’m a big guy and have found that there’s more legroom in Scania.

His passion for cars and trucks started in his teens with racing RC vehicles and these days he “messes about” with cars, in particular his prized Audi RS4. And now, there’s big red addition to his fleet.