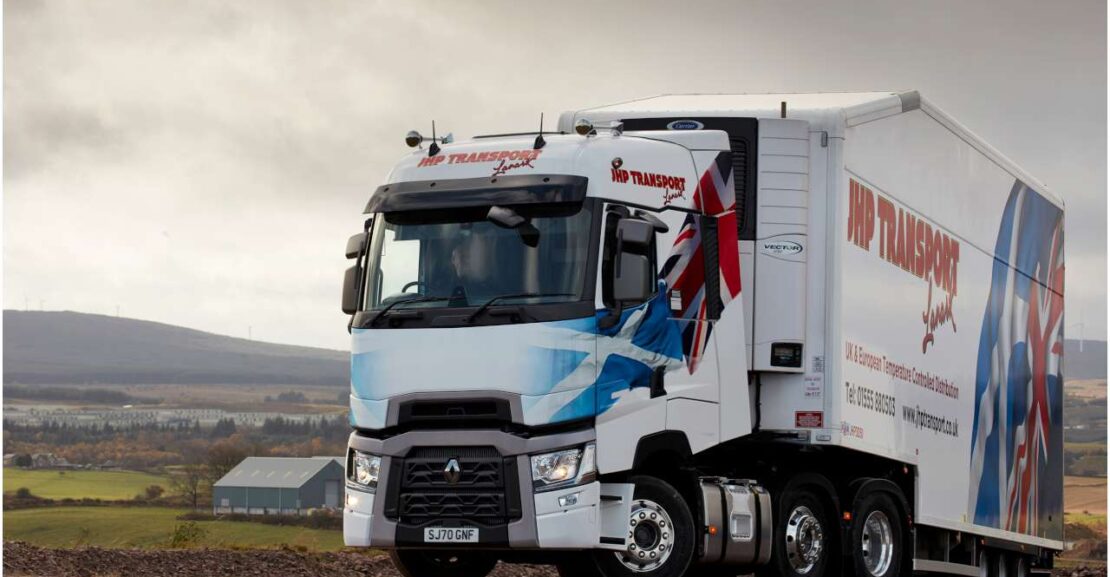 It looks like the hard work by local dealer Renault Trucks Scotland paid off in getting a sale for Renault Trucks for the first time with ambient, frozen and chilled distribution business, JHP Transport.

In addition to the sales effort on behalf of the dealer, whole-life cost including a comprehensive 300,000km per annum repair and maintenance contract, fuel efficiency, driver comfort and overall performance were the other determinants in JHP’s latest vehicle selection.

The first Renault truck on the 37-strong fleet is a T520 High 6×2 supplied by Renault Trucks Scotland.

What the Buyer Says

John Campbell-Middleton, Transport Operations Manager says: “We have been working non-stop during the pandemic and business is still picking up. We are moving time-critical refrigerated food and we need trucks that are robust, reliable and good on fuel together with a comprehensive back-up service. We’ve had demonstrators before and on the basis of a successful trial and a competitive all-round deal on the table we decided to order our first Renault truck.”

The T520 High is being used on trunking work up and down the UK’s motorways clocking up thousands of miles a week so fuel efficiency is critical as John explains: “The fuel figures on the demo we had were promising. It was getting 9mpg but that’s on a new engine so we’re expecting an improvement on those figures as the engine beds in. We’ve also included some additional extras, including the Fuel Eco+ Pack to optimise fuel consumption.”

As well as considering the fuel consumption, driver comfort was also front of mind. “The drivers are out on the road all week so keeping them comfortable and happy is key to them performing well. The internal specification is good and they like the all-round layout of the dash. We asked the team at Renault Trucks Scotland if they could supply an additional USB Charging Switch and it was done with remarkable efficiency,” says John.

John concludes: “After running a competitor manufacturer’s vehicles for many years we decided to try something new. The sales and customer service at Renault Trucks Scotland has been great so far, they even sourced a replacement truck for us at short notice, nothing was too much trouble. Based on the performance to date we’ve just placed an order for an additional vehicle, a Renault Trucks T480, and we look forward to working with the Renault Trucks Scotland team in the future.”

All Renault trucks for sale