UK Kings of the dusctcart market, Dennis Eagle has been making refuse trucks since the 1920s – originally in Guildford and in Warwick since the mid 1980’s.

In addition to the Elite chassis with its low entry cab and room for a team of operatives, the company manufactures the refuse bodies themselves under the Olympus brand name.

There are always plenty of used Dennis trucks for sale on Truckpages.  Many of these trucks are sent to export markets across the world.  As more towns and cities implement low emission zones, any pre-2014 refuse trucks either have to be converted to Euro 6 standard or sent abroad to right hand drive markets.

Unlike the main competitor in the low-entry chassis market, Mercedes-Benz, Dennis Eagle appears to concentrate solely on dustcarts, whereas Mercedes are targeting their Econic chassis at any market that spends the majority of its time in urban environments. 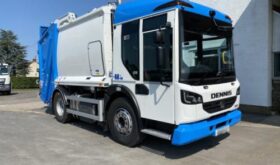 Dennis Brothers can trace their rots as far back as 1895 – originally making pedal bikes, the company built a car plant in Guilford in 1901 but decided that the commercial vehicle market was more profitable and made their last car in 1913.  After floating the business in 1913, World War One got in the way and resulted in Dennis looking at markets that were stable in the long term – therefore refuse collection, buses and fire engines were favoured at this time.

The 1950s saw the company focus on buses and fire engines, but the market requirements were not met in terms of bus design in the 1960 and the company struggled.  New management at the start of the 1970s started the company’s reival but was soon bought in 1972 by Hestair Group which already owned Eagle Engineering – makes of refuse bodies.

Hestair refocused on refuse trucks and stopped making trucks for haulage operation temporarily. Bus production started again in 1977 alongside a range of new fire trucks.  Two years after winning the Queen’s award for industry, the Dennis Managing Director was jailed in Baghdad for eight years for corruption.

The mid-1980s saw the company renamed from Hestair Dennis to Dennis Specialist Vehicles – only to change it again a year later to Hestair Specialist vehicles!

The Dennis dustcart division was finally relocated out of its Guildford home up to Warwick in 1985 where the bodies and chassis were made in the same plant.

A management buyout in 1989 saw the company aiming for the stock market once more as Trinity Holdings.  Their new bus, the Dart was successful, and the company had healthy shares of the fire engine and dustcart market.  The company changed name yet again in 1997 to the Dennis Group.

The company was taken over by a rival bus manufacturer in 1998 which sold off the fire engine and refuse business – the Dennis Eagle refuse business going to NatWest Equity partners.

1992 saw the Dennis Elite 1  dustcart for the first time with a low-entry cab. This was replaced by the Elite 2 in 2003 and subsequently the Elite 6 in 2013 for the Euro 6 emission standard.

After a brief spell under the ownership of Dutch bank ABN Amro, Dennis Eagle was bought by current owners, Ros Roca Environment Group which merged with Terberg in 2016 to create Terberg Ros Roca. 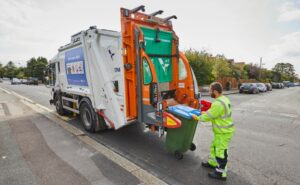 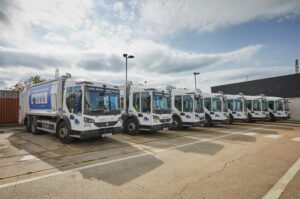 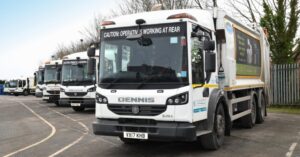