Launched back in 1996, the Renault Premium was a solid truck – nothing wrong with it – and it was well priced.  This meant that they were to be found in rental fleets and were available in their hundreds in white, ready for the used market for the owner driver to buy into.

When sold new, the Premium was the smaller relation to the flagship flat-floored Renault Magnum.  The Premium cab was narrower than you would expect for a full sized long-distance truck at 2.3m, although there was a ‘Privilege’ high roof version. There was also an ‘Excellence’ version – but we don’t see too many of these advertised for sale here.

This smaller cab and well-packaged 11-litre engine meant that the Premium was light and good on fuel.

After nearly ten years with the same 11.1 litre engine, 2005 saw Renault dip their hands into the Volvo Group parts bin to use their 9-litre engine which was increased to 10.8 litres and called the DXi11 – this engine lasted until the Premium was replaced by the Range T in 2014 for Euro 6.

The bulk of the remaining Premium trucks for sale in the UK’s used truck market are tractor units, although a number of rigids remain.

Looking for the newer model? View the Renault Range T for Sale 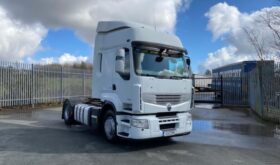 Other Model Variants of Premium