The DAF LF range of trucks is the smallest truck made by DAF.  Available in the UK from 7.5 tonnes to 12 tonnes GVW.  Operators love to buy these trucks as they are reliable, there are plenty of them (DAF have been UK market leaders for well over a decade) and the dealer support is excellent nationwide.

There is always a great selection of used DAF LF 7.5 tonners for sale here at Truckpages – it is the Ford Focus of the truck world no one aspires to have one, but they are pleased when they do.  The LF makes a great box van or curtainsider for local distribution and is flexible enough to work as a 7.5 tonne tipper – a typical builder’s merchant truck.

For operators needing a larger payloads from a DAF truck, they should consider the next size up, the DAF CF.  DAF’s top end model is the XF – typically used as a tractor unit in the UK.

Be the first to know 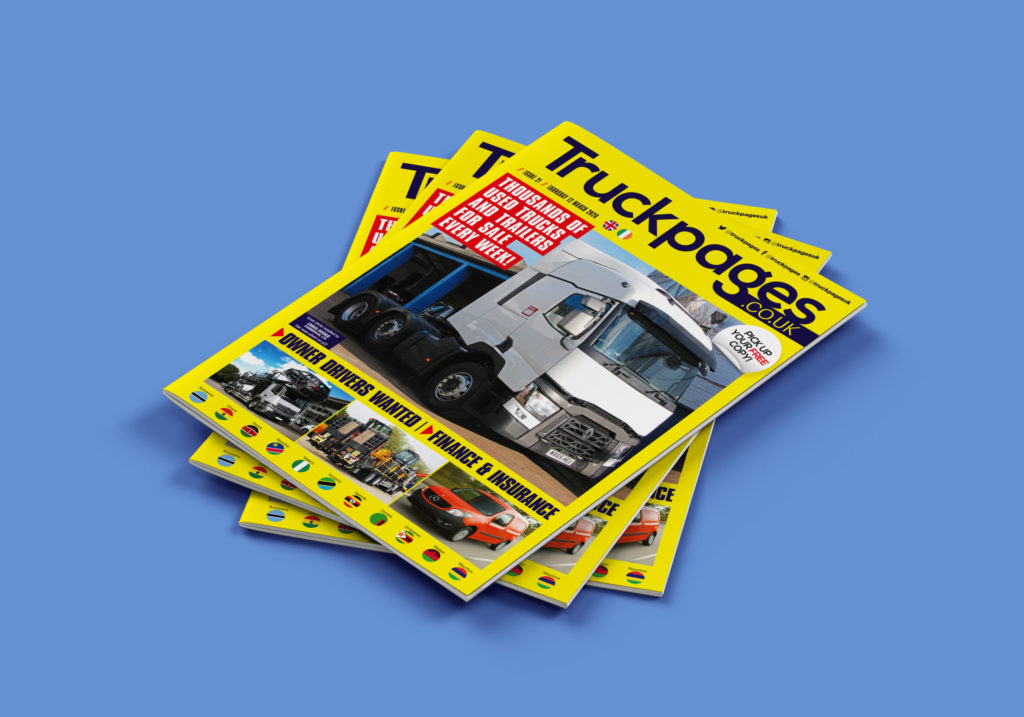 The first Truckpages magazine will roll off the presses on 15th June after a pause in production of nearly three months.  The printing of the magazine was suspended temporarily due to the Covid-19 lockdown and the resulting high number of truck dealers scaling back and closing their gates completely. Now the news has been released…

When buying a used DAF LF, as with other trucks, it is important to know the milestones for the new engines or facelifts, so you don’t end up buying the wrong one for the job. The DAF LF’s history starts back in 1985, although anyone looking to buy an LF (600-, 800 or 1000 series as they were called) from that era will be buying for a museum, rather than for going to work.

The precursor to the LF series and immediately recognisable is the 600, 800 and 1000 series which took over from the outgoing 500, 700 and 900 series.  Check out the image below of the 1000 series and you can still see the basic cab that is available in the modern LF trucks of today.  This cab was shared with Leyland (then a UK company) that branded their truck as the Roadrunner.

Originally launched as the 45 series (with larger brother the 55 series using the same cab).

Available from 6 to 18 tonnes (although favoured at 7.5 tonnes in the UK, the modern looking LF took the UK by storm with the cab shared with the Renault Midlum and manufactured in the Renault plant.

With a new design and engines, this bestseller had to take the title for truck on the year in its first year of sales.

As with all other DAF trucks, the LF range got a facelift and revised engines for Euro 4.  In fact DAF, like most manufacturers made Euro 5 available early, so relatively few Euro 4 trucks were sold.

The LF was now available as an EEV as standard. (Enhanced Environmentally Friendly Vehicle.)

New interior of the LF was renewed with some teaks to the outside.

DAF were very early in the diesel hybrid game with a display of a hybrid 12 tonne LF as far back as 2010.  These subsequently never went into serous production as the market was not calling for them, despite CO2 reductions available.

No mean feat making this many trucks at DAF’s assembly facility at Leyland in Lancashire.

With much fanfare, DAF launched their whole Euro 6 range at Birmingham’s CV show in 2013.  The trucks themselves were better on fuel and looked much more modern than the outgoing Euro 5 models.  No new cab, keeping the now well-tried and tested cab that has been used with Rentualt for many years.  The driveline technology is all new.

The LF Aerobody was a 12-tonne distribution truck delivered ex-works with an aerodynamic PACCAR body. Combined with a specially developed set of spoilers and bumpers, a significant saving on both fuel consumption and CO2 emissions was possible.

New drivelines and aerodynamic package and a wider choice of wheelbases became available in 2017 for the LF. Enhanced software and better heat and air management in the exhaust gas after treatment system, make the 4.5-litre PACCAR PX-5 engine up to 5% more fuel efficient.

A new 3.8 litre PACCAR PX4 engine at 156 and 172hp.  This smaller swept volume engine was aimed at urban operation, where lightweight and low emission engines rule supreme. Changes included chrome strips on the grille and a new logo panel, with the letters ‘DAF’ in chrome outlines